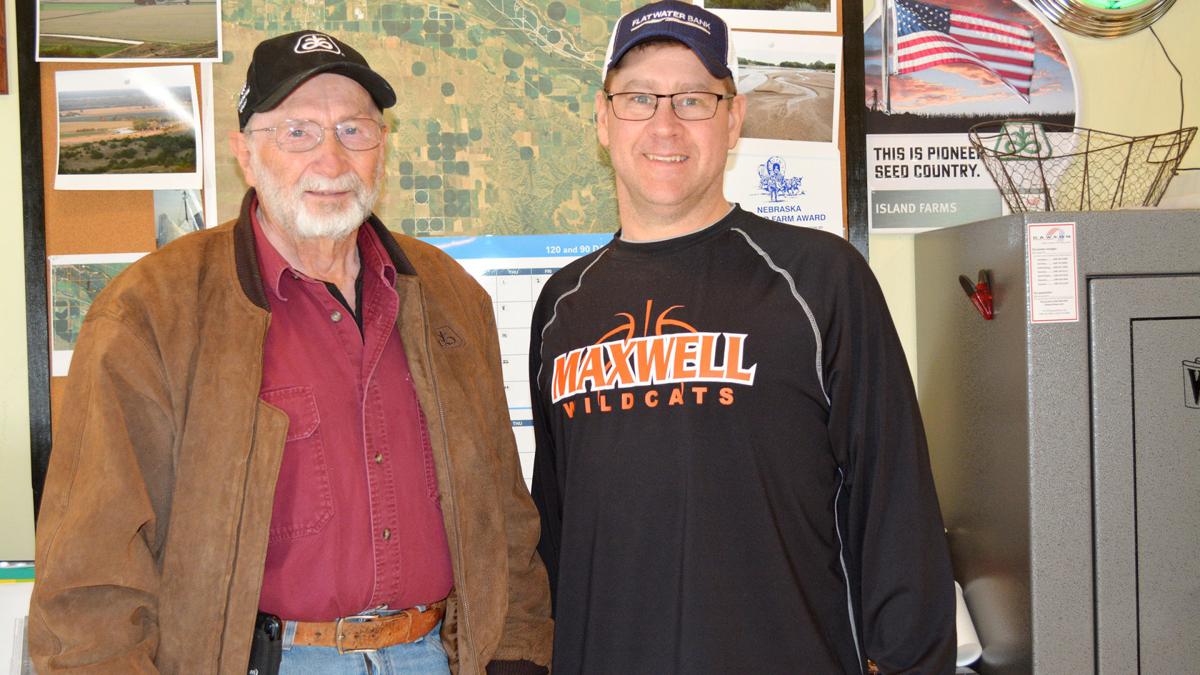 Dale Wahlgren, left, and his son-in-law Jeff Huffman pose in the office at Island Farms LLC. Wahlgren ran the operation for 31 years and Huffman took it over 20 years ago. 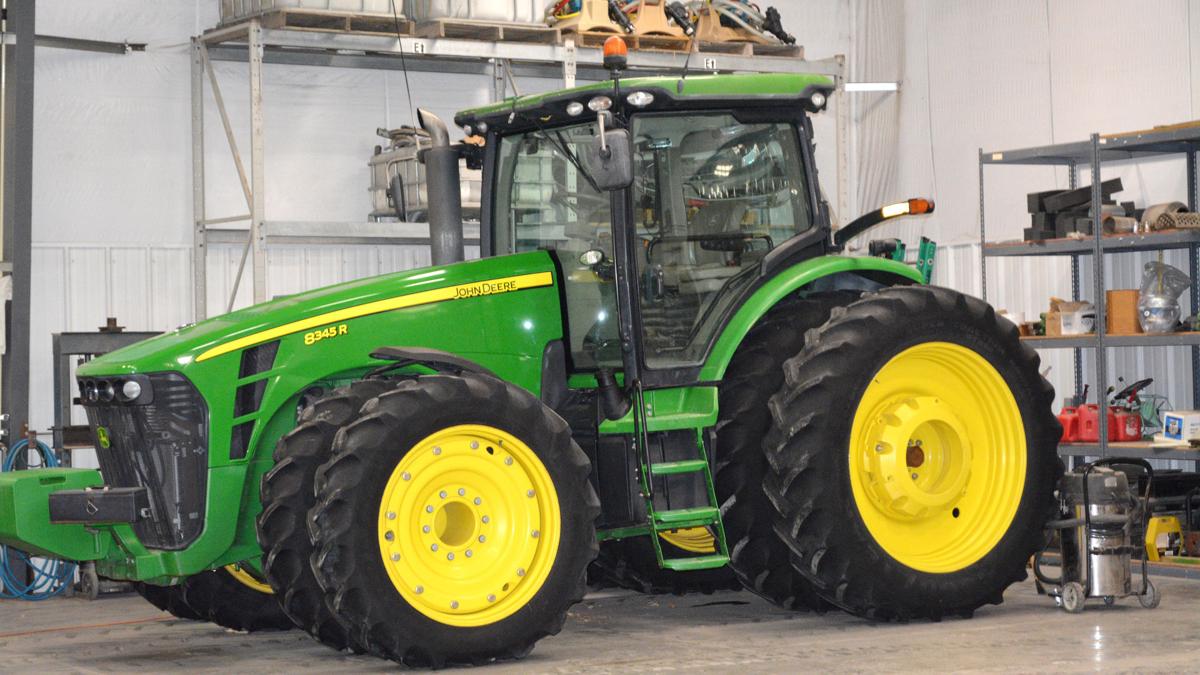 Jeff Huffman and his father-in-law Dale Wahlgren store their equipment at a couple of different locations following the harvest season each year. Taking care of the equipment is vital to keeping the machinery in good shape for the next round of planting and harvesting. During harvest, the operation has more than $1 million worth of equipment in the field. 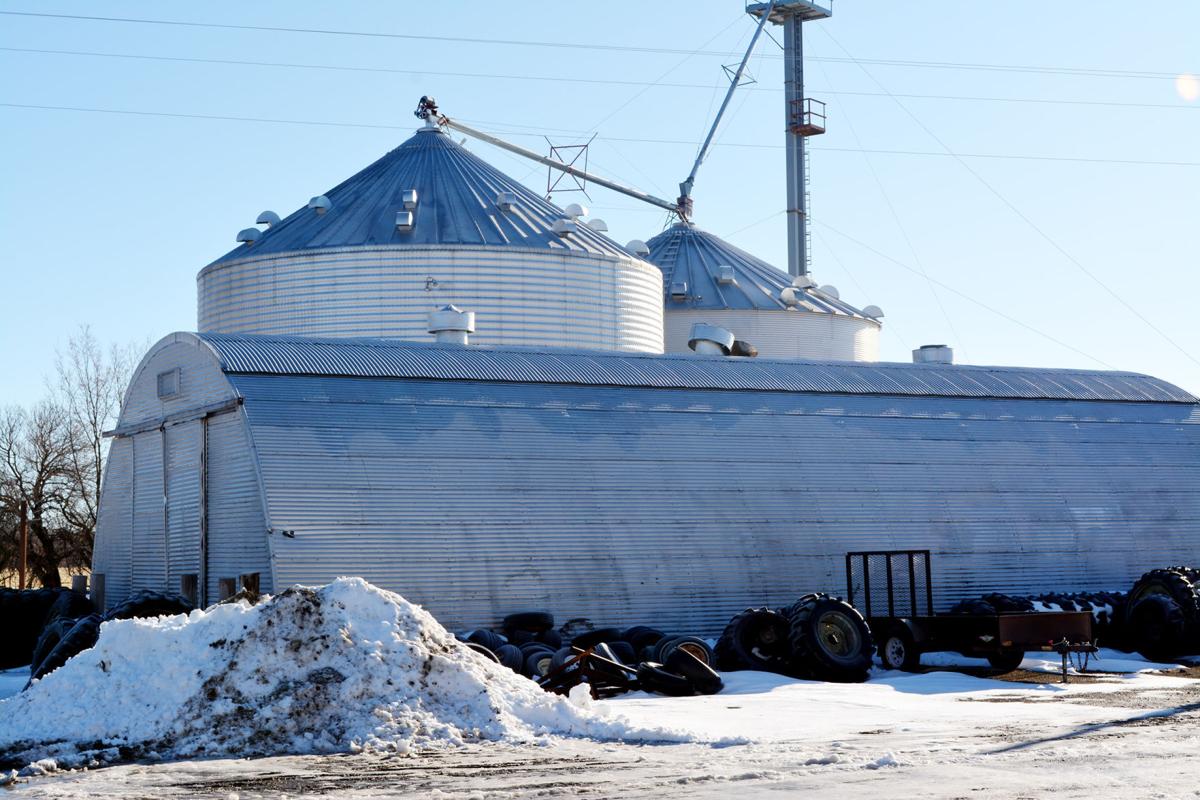 Island Farms LLC, stores its food-grade corn that is sold to Frito-Lay to make chips. Shipments are made monthly as farm owner/partner Jeff Huffman dries the corn in these bins to the proper level.

Dale Wahlgren, left, and his son-in-law Jeff Huffman pose in the office at Island Farms LLC. Wahlgren ran the operation for 31 years and Huffman took it over 20 years ago.

Jeff Huffman and his father-in-law Dale Wahlgren store their equipment at a couple of different locations following the harvest season each year. Taking care of the equipment is vital to keeping the machinery in good shape for the next round of planting and harvesting. During harvest, the operation has more than $1 million worth of equipment in the field.

Island Farms LLC, stores its food-grade corn that is sold to Frito-Lay to make chips. Shipments are made monthly as farm owner/partner Jeff Huffman dries the corn in these bins to the proper level.

They don’t sit around eating bon bons and taking trips to the Bahamas after harvest. Winter is probably one of the most important times for farmers, as they prepare their business for the upcoming year.

Jeff Huffman has recently finished fall harvest and now he is taking the time to look back at the results of 2019, while looking ahead to 2020. Huffman operates the family business on the property his in-laws, Dale and Cheryln Wahlgren, have farmed for 50 years. Lindberg Island Farm, now Island Farms LLC, near Maxwell, was recently honored by the Aksarben Foundation Pioneer Farm Award at the Lincoln County Fair in July.

Huffman and Wahlgren are partner/owners of the operation that produces food-grade corn for Frito-Lay.

“A lot of what I do (in the winter) is in front of this desk and looking at my computer screens,” Huffman said as he watched the corn prices on a live trading platform on his computer. “Right now, March corn is up 4 cents and next December’s corn is up 2 cents.”

Huffman said this time of year is a time of reflection.

“It’s analyzing what happened last year,” Huffman said. “Farming is a day-to-day business, but there’s an annual side of it where our fiscal year is Jan. 1 to Dec. 31.”

That yearly process, he said, actually started for him a couple of months ago.

“The analyzing of last year started in the middle of harvest, as far as, here’s where we kind of thought we were going to be,” Huffman said. “This year our yields were off, so we don’t have as much to sell. Obviously, we’re not going to make as much money, or any, so I think it’s going to be a ‘loss’ year, to be honest.”

Huffman is still working on reconciling the numbers from the year and doing the bookwork.

“This is where that transitions from a look backwards to a look forward, and that’s every year,” Huffman said. “That work is ongoing, because I’m thinking during harvest, we don’t have as many bushels out here, therefore the cash flow is down. Some of those things I’m thinking about purchasing in 2020, those are going to have to be put on hold or we’re going to have to readjust.”

This part of the operation is very complex, he said, and while farmers have to where a number of different hats they also rely on other professionals to help them make good decision.

“All of those have to interplay so that the plan we put together in January or February, we can start to execute it in April or May,” Huffman said. “That’s where a lot of faith comes in.”

Another important part of the winter work is maintaining the farming equipment. His farming operation owns all its tractors and combines and implements.

“We have a full-time employee, Steward Carsten,” Huffman said. “It’s a big enough operation that it’s more than what one man can do, but the equipment is under his care.”

After harvest, the maintenance process starts simply enough with washing and putting the machinery away.

“A lot of times that’s when we’ll do the oil changes,” he said. “We do more what I would call maintenance ourselves, but major repairs is something that we’ll rely on Plains Equipment Group.”

Wahlgren said they own mostly John Deere equipment so the Plains Group does an annual inspection as part of their service.

“The smaller equipment, we end up doing all of that ourselves, unless we have an engine go bad or something major like that,” Wahlgren said. “There are some diagnostic things we can do, like check for oil leaks or if we have an electrical connection that’s not working that we can do. But the newer tractors have computers and you pretty much have to go to the source, the dealership.”

The lifespan of the equipment has a lot of variables.

“That’s a complicated question, but if we just want to fix it and keep it going, it can be for a lot of years,” Huffman said.

Huffman and Wahlgren said it all comes down to what is the most prudent thing to do that will benefit the business and keep the costs down.

Wahlgren took over the farming operation in 1970 and after renting the property for 31 years, the opportunity came to purchase it in 2001. Huffman was invited to join the operation and now manages the business with Wahlgren’s help.

“One thing farm families deal with is transition,” Huffman said. “We had the opportunity to continue the operation and decided it was a good move.”

Huffman and his wife, Robyn, were both teaching at the time and decided this was a good opportunity for them to make a move.

With Wahlgren’s longevity in the operation, he has an understanding of what has helped him be successful.

“You’re always in debt,” Wahlgren said. “You have to learn how to manage debt. I think that’s kind of the key.”

In the good years, one needs to save something back for the lean years.

“For me,” Huffman said, “what I’ve learned from being in it for 20 years now, witnessing it from Dale, it’s the word you hear in church and all that, is the word ‘steadfast’ or that ‘patient endurance’ that (the Apostle) Paul talks about.”

Huffman said there are things that are out of their control, but he and his family just have to be prepared to weather those storms.

Both Huffman and Wahlgren find joy and satisfaction in farming.

“I always have a little statement I use — In farming, you can choose the hours you work, as long as you put in 60 a week,” Wahlgren said. “If the kids have a basketball game this afternoon, you can leave work and you can go, but you might have to work into the night when you get home.”

Wahlgren said he likes the fact that in farming, you’re never doing the same thing over and over again and both men enjoy the family aspect of their business.

“Dale and I probably find joy in different things with the farm, which is normal for two different guys,” Huffman said. “For me, what brings me joy is interaction with the people we do business with, I enjoy those interpersonal things and getting to know people. I kind of enjoy that 30,000 foot view, I really enjoy that overview and the planning.”

MIKE OF ALL TRADES