Under this new DHM, schools are closed through May 31, 2020 and extracurricular activities are also cancelled. Additionally, the new DHM cancels elective dental procedures and surgeries.

The quarantine measures are for individuals who are COVID-19 positive or develop fever, sudden onset of a dry cough, or sudden onset of shortness of breath without provocation (such as walking up stairs, running, choking, etc.). This excludes those with seasonal allergies, COPD, or other diagnoses that may produce respiratory symptoms. Additionally, the directive doesn’t apply to patients who have an alternative non-COVID-19 diagnosis from a healthcare provider. These patients should follow the treatment and guidance provided by their healthcare provider for such conditions.

The State-issued DHM now applies to 56 counties in Nebraska. 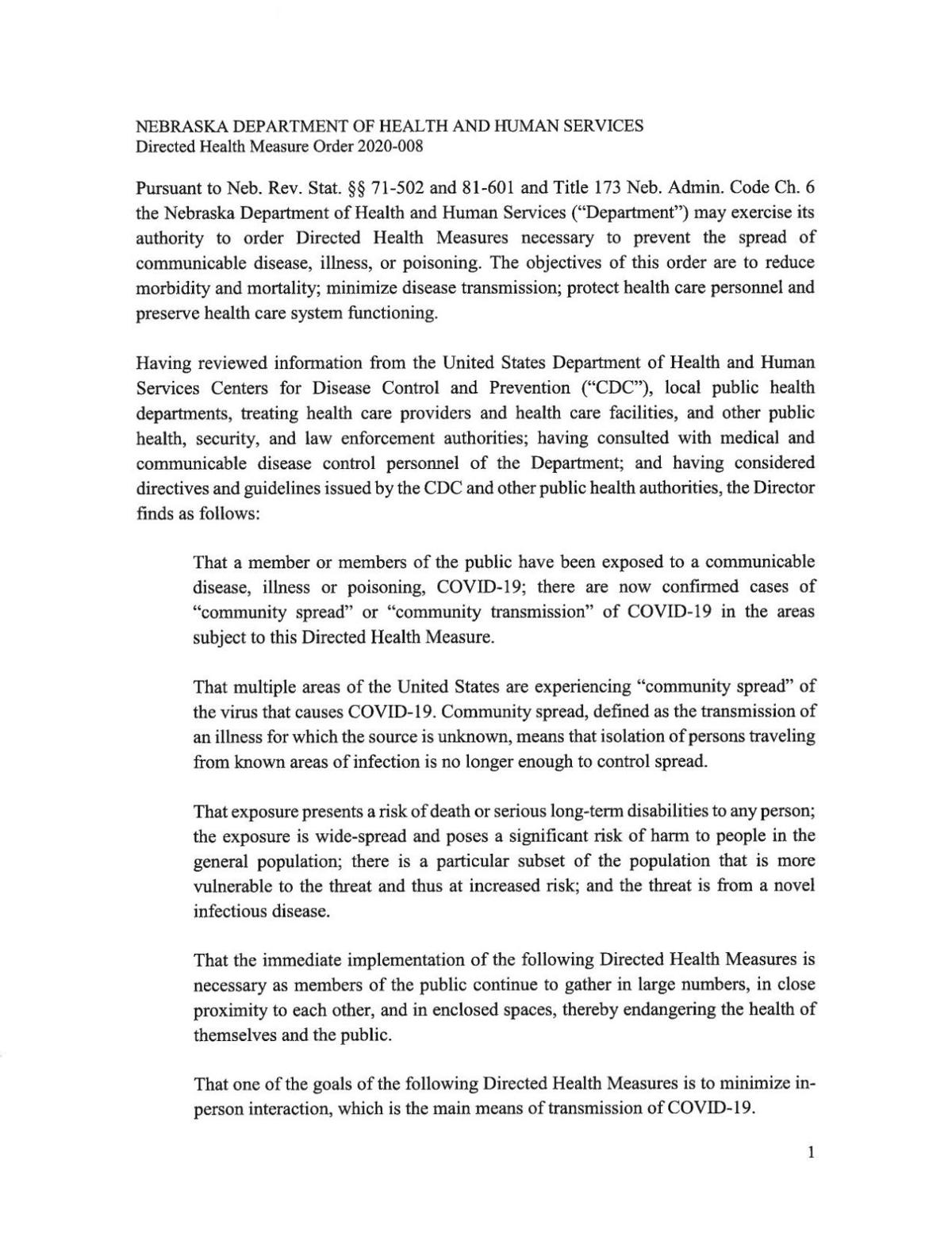 The first DHM, issued on March 18th, applies to Cass, Douglas, and Sarpy counties and is in effect until at least April 30th.

The second DHM, issued on March 25th, applies to Dodge, Lancaster, Saunders, and Washington counties and is in effect until at least May 6th.

The third DHM, issued on March 28th, applies to Butler, Hall, Hamilton, Merrick, Polk, Seward, and York counties and is in effect until May 6th unless renewed.

The fourth DHM, issued on March 29th, applies to Burt, Cuming, Madison, and Stanton counties and is in effect until May 6th unless renewed.

The sixth DHM, issued on March 31st, applies to Adams, Clay, Nuckolls, and Webster counties and is in effect until May 11th unless renewed.

The seventh DHM, also issued on March 31st, applies to Buffalo, Dawson, Franklin, Gosper, Harlan, Kearney, and Phelps counties and is in effect until May 11th unless renewed.

The DHM imposes an enforceable limit on public gatherings. Among other steps, the DHM requires restaurants and bars in these areas to close their dining areas immediately and move to takeout, delivery, and/or curbside service only until further notice. Additionally, schools in these areas are directed to operate without students in their buildings. This restriction does not apply to school staff working in school buildings. It also does not apply to daycares that may be operated at a school per the Governor’s executive order regarding childcare. 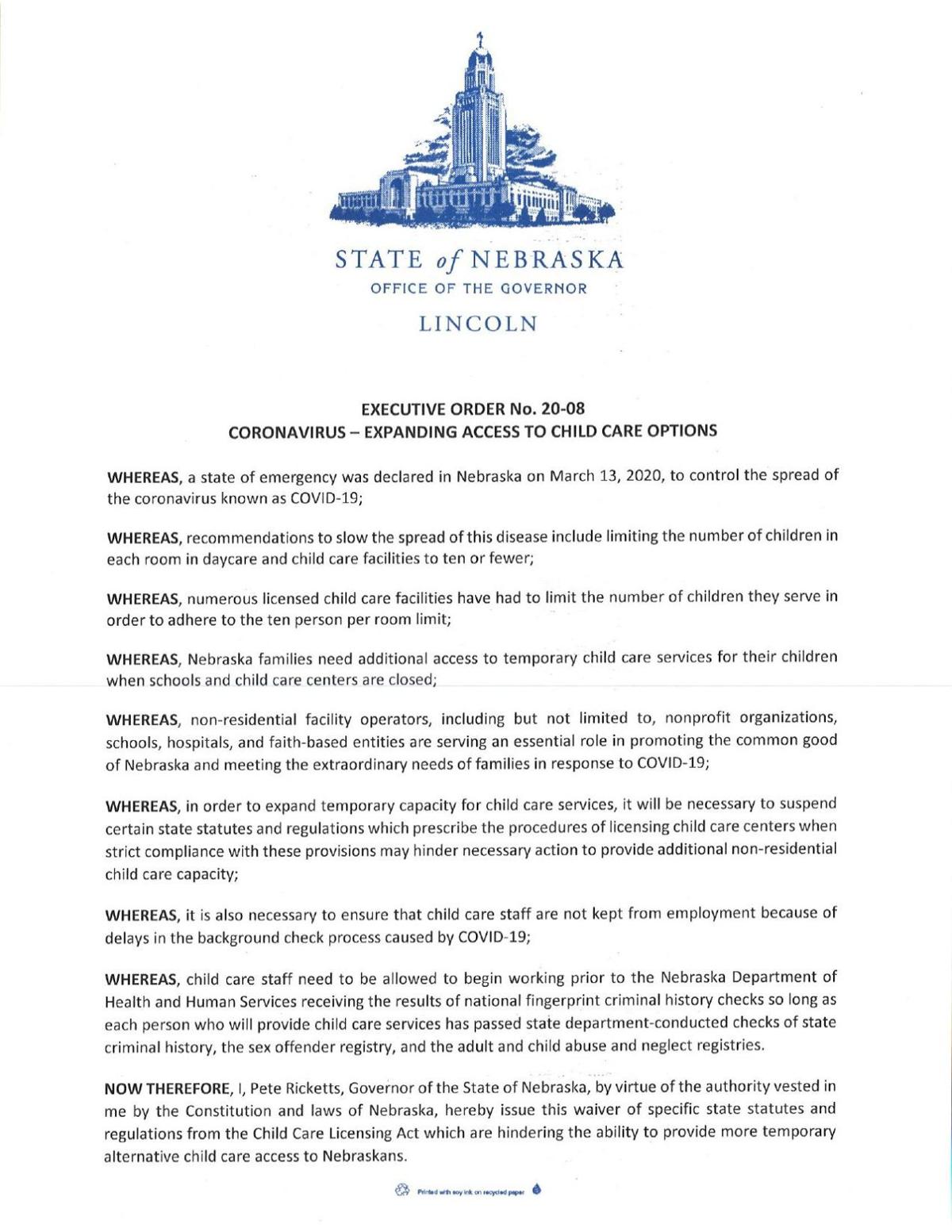 Counties other than those noted above remain under the guidance issued March 18th by the Governor’s Office. If further community transmission cases of COVID-19 occur in other regions of the state, the Governor will announce DHMs covering the additional regions. 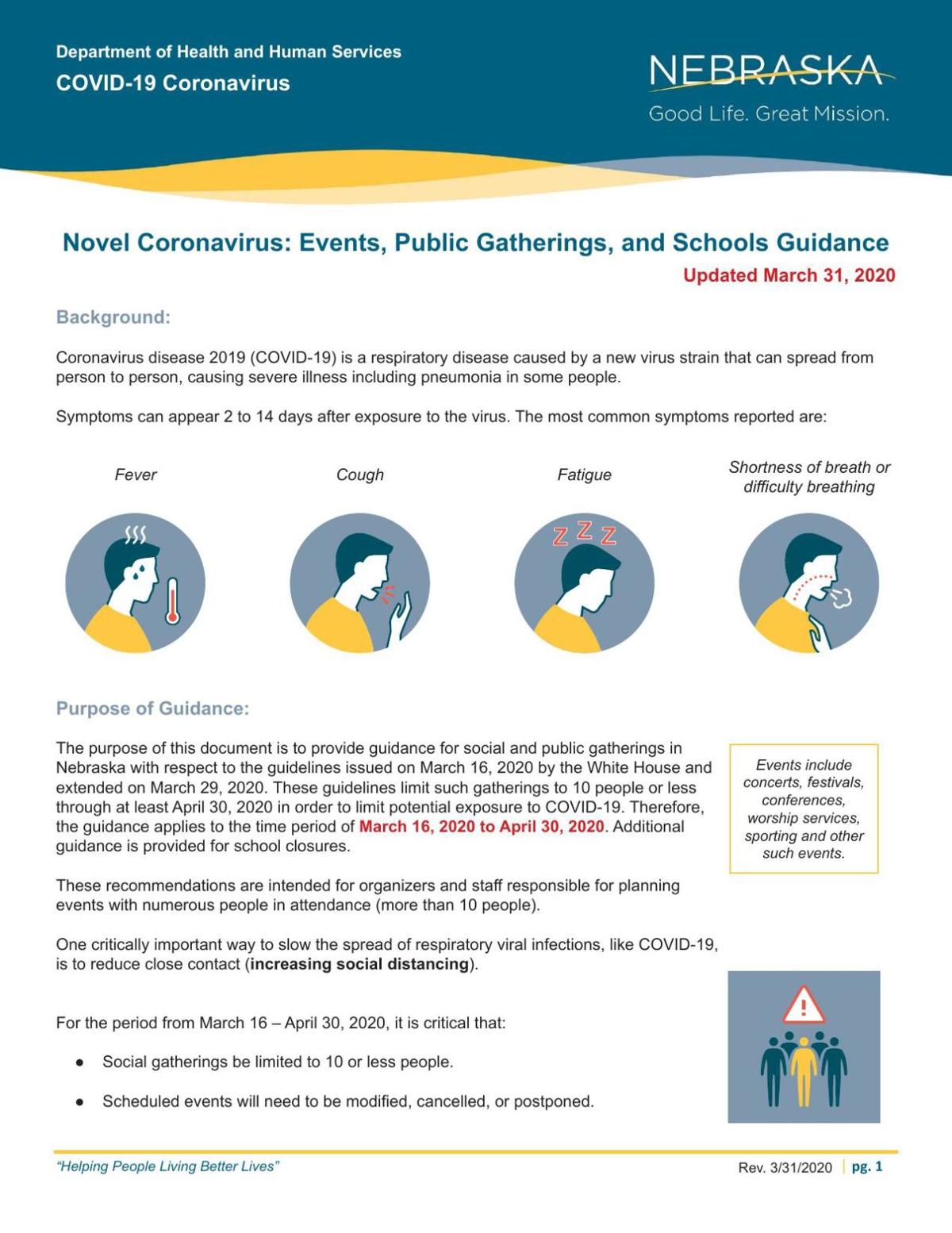 In addition to the DHMs issued by the Nebraska Department of Health and Human Services, Douglas County Public Health Director Dr. Adi M. Pour has issued an order covering Douglas County from March 18, 2020 through April 30, 2020. Full details of the order can be found on the Douglas County Health Department website (douglascountyhealth.com).

The Lincoln-Lancaster County Health Department also issued a DHM. The order lasts until May 6, 2020.

Furthermore, the Sarpy/Cass Health Department issued a DHM. The order lasts until April 30, 2020.

Who does the Directed Health Measure apply to?

It applies to places such as theaters, churches, houses of worship, gyms, social clubs, salons, and social gatherings, including weddings, funerals, concerts, and athletic events. This is not an exhaustive list, but illustrates the types of locations the DHM applies to.

Do I need to shut down my bar or restaurant?

At bars and restaurants, it applies to patrons, not to your workforce. Restaurants and bars are encouraged to ask their patrons if they can prepare their order for takeout upon arrival. Restaurants will play a key part in feeding people throughout the pandemic.

Do I need to shut down my daycare?

No. DHHS has issued new guidance that daycares need to follow. 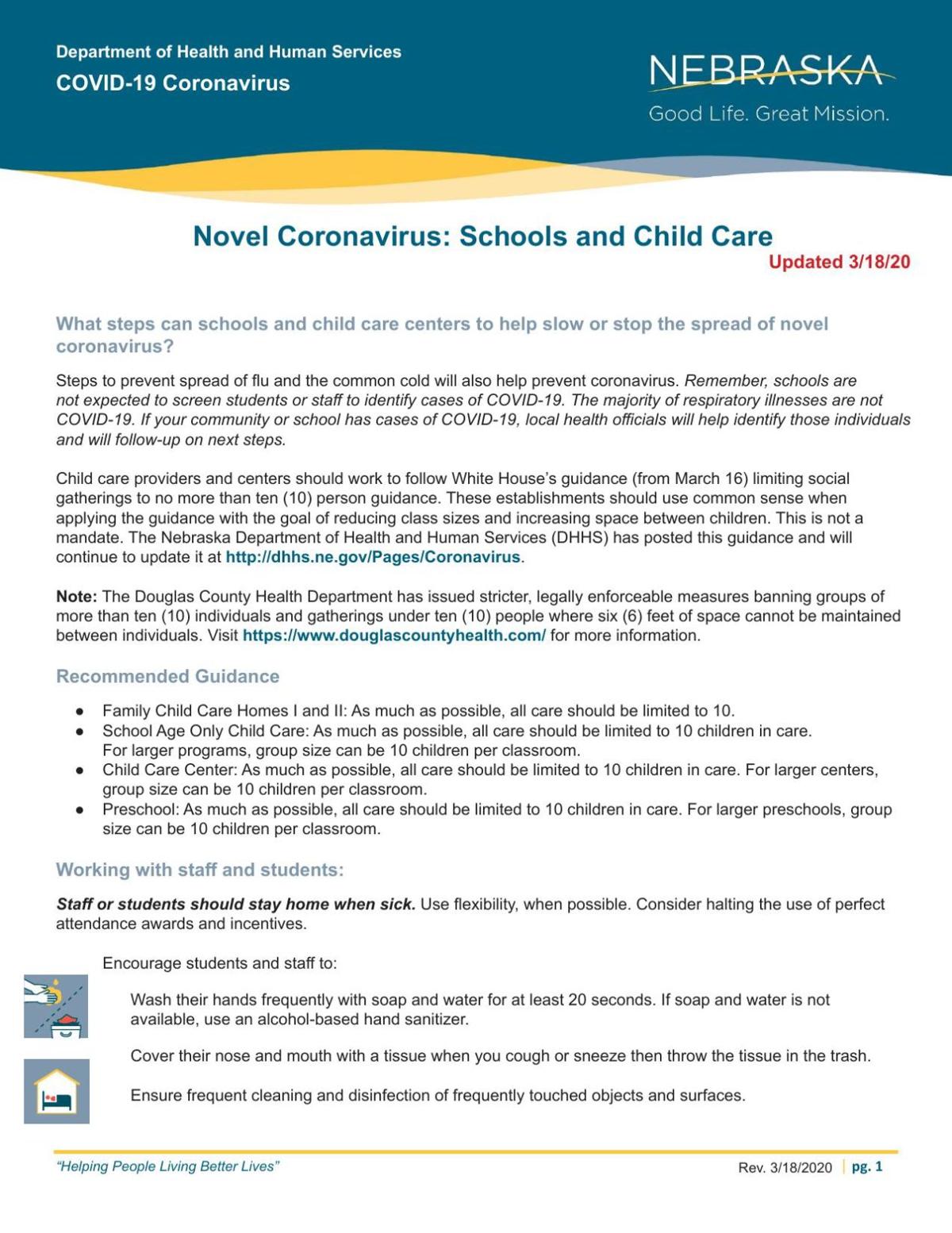 Do I need to shut down my office?

Furthermore, we do not expect these facilities to be impacted by additional limits at this time.

Do I need to cancel a wedding or a funeral?

Weddings and funerals are also subject to the 10-person limit. Event planners and facilities are encouraged to be flexible with people who are rearranging their plans.