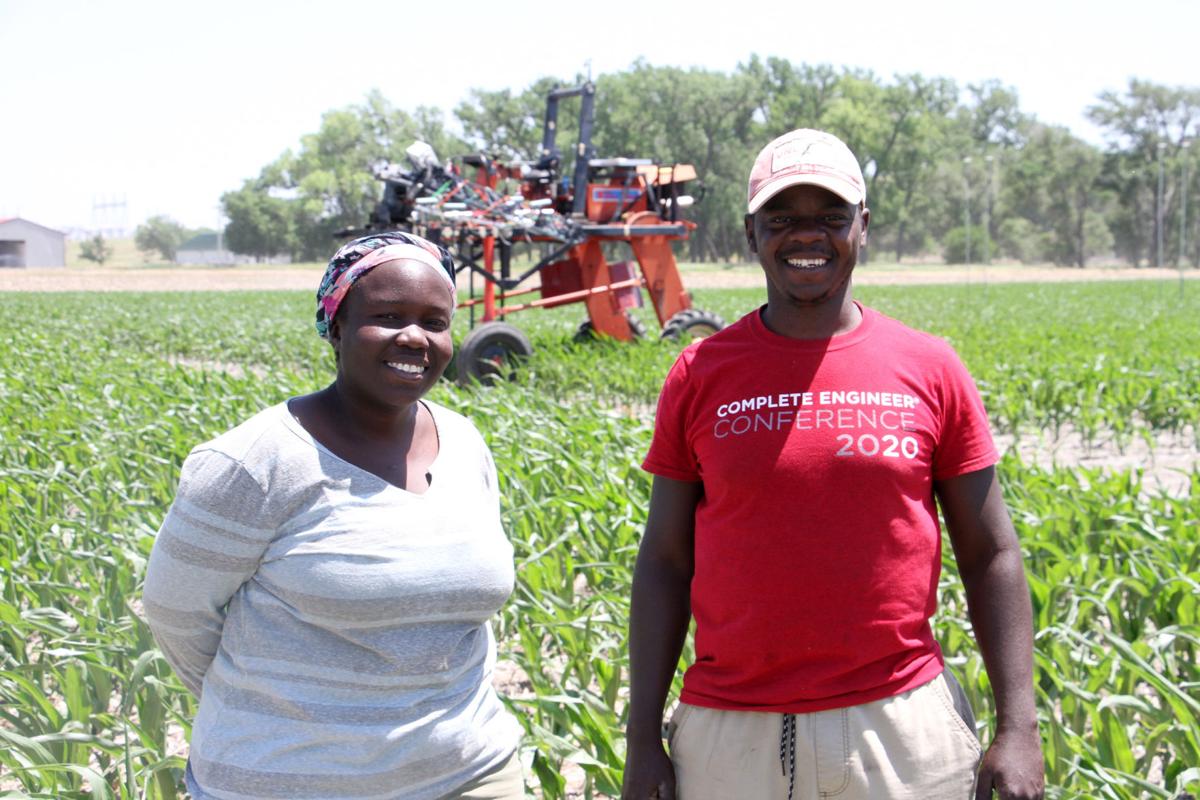 Hope Nakabuye, left, and Abia Katimbo, both of Uganda, are studying irrigation techniques at the West Central Research and Extension Center in North Platte. The students are working toward their master’s and doctoral degrees, respectively, and have been in North Platte for the last couple of years. 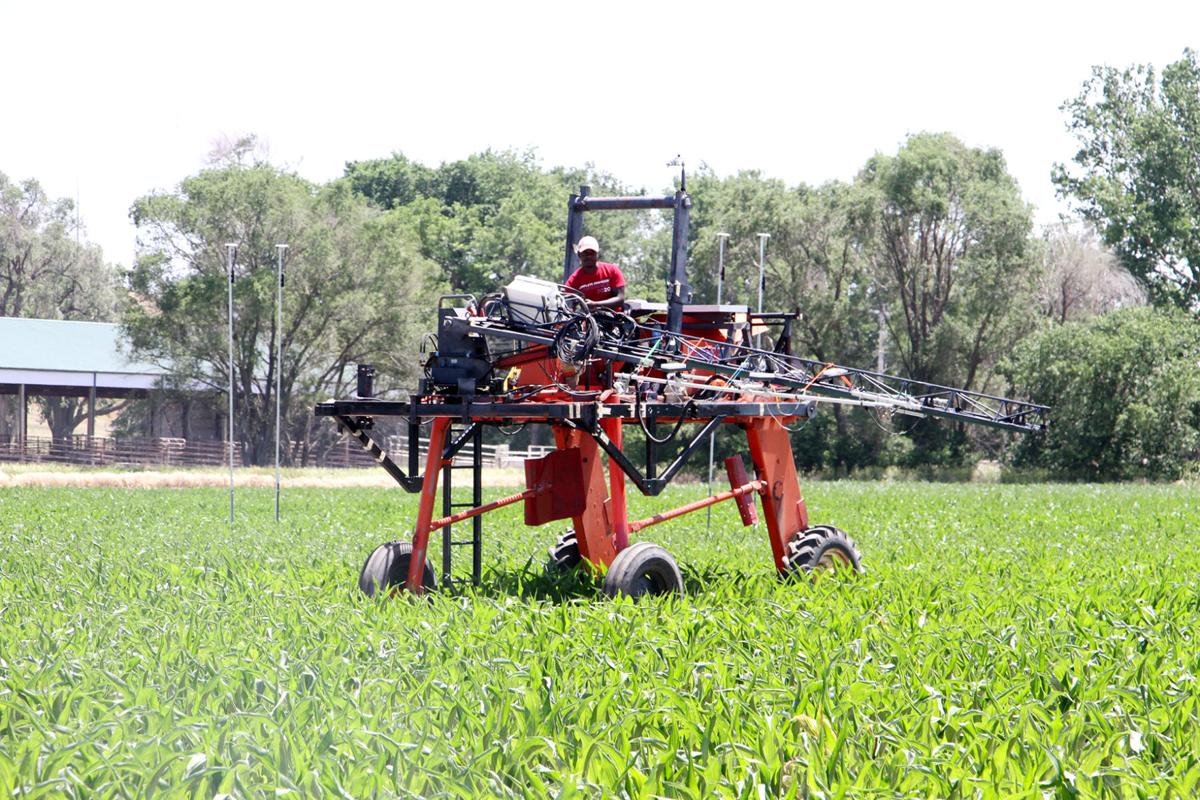 Abia Katimbo, of Uganda, checks sensors in a research plot at the West Central Research and Extension Center in North Platte. Katimbo and fellow Ugandan Hope Nakabuye are working toward their doctoral and master’s degrees, respectively, and hope to take their knowledge back to their home country to help educate agriculture producers in their area.

Hope Nakabuye, left, and Abia Katimbo, both of Uganda, are studying irrigation techniques at the West Central Research and Extension Center in North Platte. The students are working toward their master’s and doctoral degrees, respectively, and have been in North Platte for the last couple of years.

Abia Katimbo, of Uganda, checks sensors in a research plot at the West Central Research and Extension Center in North Platte. Katimbo and fellow Ugandan Hope Nakabuye are working toward their doctoral and master’s degrees, respectively, and hope to take their knowledge back to their home country to help educate agriculture producers in their area.

Their journey began with a love for their country and a love for learning about agriculture. It continues with an opportunity that brought Hope Nakabuye and Abia Katimbo to study at the University of Nebraska’s West Central Research and Extension Center in North Platte.

The students from Uganda are working toward their master’s and doctoral degrees in irrigation studies. Although they did not meet until coming to the WCREC, they come from the same district and tribe.

Nakabuye came to Nebraska because of her interest in irrigation techniques.

“Nebraska is really good in irrigation, so I was looking for opportunity for graduate school,” Nakabuye said. “I searched around and this was one of the places that I applied to, and my supervisor Dr. Daran Rudnick (irrigation and water management specialist) was gracious enough to take me through a series of interviews, and after that I was able to get the position.”

Both students said that back home, irrigation is not really embraced by the farmers.

She said that causes problems with a ripple effect: no food for the farmers, and then if there is limited production, prices will skyrocket.

“So I was interested in seeing how best can we get water to our crops,” Nakabuye said.

Uganda has a tropical climate.

“We definitely don’t have a winter,” Nakabuye said. “The way we define our climate is we have two dry seasons and two wet seasons, that’s how we call it.”

There are three months of wet then dry, then wet, then dry and so on.

“But, of late, you find that maybe you only have the rains once compared to the twice that you expected,” Nakabuye said. “So that is a problem.”

She said a lot of surface water is available from lakes and rivers.

“But we need to be able to channel that water to the farm,” Nakabuye said. “Not everyone can have the land right next to the river or the lake.”

The challenge, she said, is setting up a system to get that water from where it is to the farm.

“That is still our challenge,” Nakabuye said. “There is some (irrigation), but this is for major industry.”

She said the big sugar cane and flower growers have ample irrigation systems.

“But my major interest is in irrigation for the small holder farmers, as we call them,” Nakabuye said. “These are challenged and yet they are the ones who are literally supplying the day-to-day food for the people because you can’t eat all sugar cane or flowers, you need food.”

Nakabuye said the farmers who grow the food are the ones who don’t have water. The big industries can afford to get the equipment.

“But the holder farmers have smaller pieces of land, so maybe they need to come together as a group and maybe see how that would work,” Nakabuye said. “Maybe a community system ... then they could pool resources or maybe get a subsidy to work together.”

Katimbo said it is important to him to gain the knowledge and to go back and impart that knowledge to his countrymen.

“I want to be a mentor,” Katimbo said. “Back home the college is not modernized. It’s kind of what we learned from our grandparents.”

Most farmers don’t use modern technologies.

“I think people’s eyes need to be open to the technology that you can use so you can have a profitable business in agriculture,” Katimbo said. “I’m trying to learn the technology about sensors and things so I can go back home, share stories and tell them these are the things that USA is using.

“So maybe if you could pick one or two of the things that they are doing, maybe you could boost your income.”

Katimbo said if people realize these technologies are available and he can show them how it is useful, they may become more interested in them.

“There are some good farmers who really have far reach who will be able to access this technology, but there are some who don’t know this exists,” Katimbo said. “These are the things we need to share with them.”

The small farmers in Uganda grow corn, vegetables and matoke (or matooke), which is a plantain banana. Plantains are a staple crop. They grow potatoes, beans and rice as well.

Nakabuye has been studying in North Platte for nearly three years and will graduate in the next year. Katimbo is in his second year and working toward his doctorate in agriculture.

Their local language is Luganda. When they great someone, they say “Ogamba otya,” which means “how are you.” “Ndi bulungi” means “I’m fine.”

Both students said they love the easy pace of North Platte and the people of Nebraska are nice as well.

“It’s a process to (bring change to our country),” Nakabuye said. “It’s not easy to just come in and transform everything. It takes time to transform the education sector, then transform health and things that are very passionate to someone’s well-being and then see the need to diversify into these other sectors.

“I guess we’re a work in progress. Hopefully, we’ll get there sooner rather than later.”