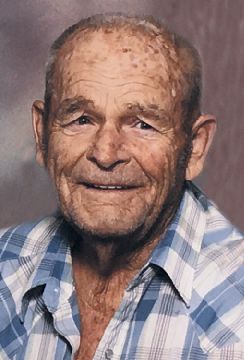 Clyde Nichols, 83, of North Platte, died at Great Plains Health on May 6, 2020. Clyde was born in Goodland, Kansas, to Clyde and Almima Woodard on April 25, 1937, and was later adopted by Earl Nichols. When Clyde was eight, the family moved to Nebraska, living north of Stapleton for a couple of years before moving to North Platte in 1950. Clyde enlisted in the U.S. Air Force in 1954, beginning his 20-year career in the military. He later worked at Hill Air Force Base in Salt Lake City, loading aircrafts and driving a truck. On July 31, 1976, Clyde married Barbara Ann Peterson in Kaysville, Utah. By 1989, Clyde returned to North Platte where he resided ever since. Over the years Clyde enjoyed starting his day with his buddies having coffee at The Diner. He liked watching western movies, listening to old country music and racing cars. He also liked antique cars and enjoyed doing yard work, caring for his flowers and cooking, fried green tomatoes were his specialty. Clyde was a member of D.A.V. He was preceded in death by his wife, Barbara; father, Clyde Woodard; parents, Almima and Earl Nichols; stepfathers, Arthur Mickish, Oscar Hale and Sidney Baker; brothers, Eldon Nichols and John "Jack" Nichols, Sr.; and grandson, Eric. Clyde is survived by his children, Rhonda Nichols, Kyle (Kay) Nichols and Dewaine Nichols, all of North Platte; brother, Paul (Pat) Mickish of Tulsa, Oklahoma; sisters, Eda (Bill) Fischer and Agness (Calvin) Page, of Texas and Cathy Chumley, of North Platte; five grandchildren; three great-grandchildren; and other family. In lieu of flowers, memorials are suggested to the American Cancer Society. Graveside service will be at 10 a.m. Thursday, June 18, at Fort McPherson National Cemetery, near Maxwell, with full military honors. Odean Colonial Chapel at C & Sycamore is in charge of arrangements.

Add an entry as

THANK YOU for helping us ensure that all guest book entries are positive and considerate. If you see a negative or inappropriate comment, please click on the link in the comment to report it, and a staff member will follow up immediately.

Add an entry
Watch the guestbook. Stop watching this guestbook.

Funeral homes often submit obituaries as a service to the families they are assisting. However, we will be happy to accept obituaries from family members pending proper verification of the death.

Offer a personal message of sympathy...

You'll find individual Guest Books on the page with each obituary notice. By sharing a fond memory or writing a kind tribute, you will be providing a comforting keepsake to those in mourning. From a Guest Book, you may log in with your user account to leave a message. If you have an existing account with this site, you may log in with that. Otherwise, it's simple to create a new one by clicking on the Create "Sign up" button and following the simple steps on the Sign Up page.