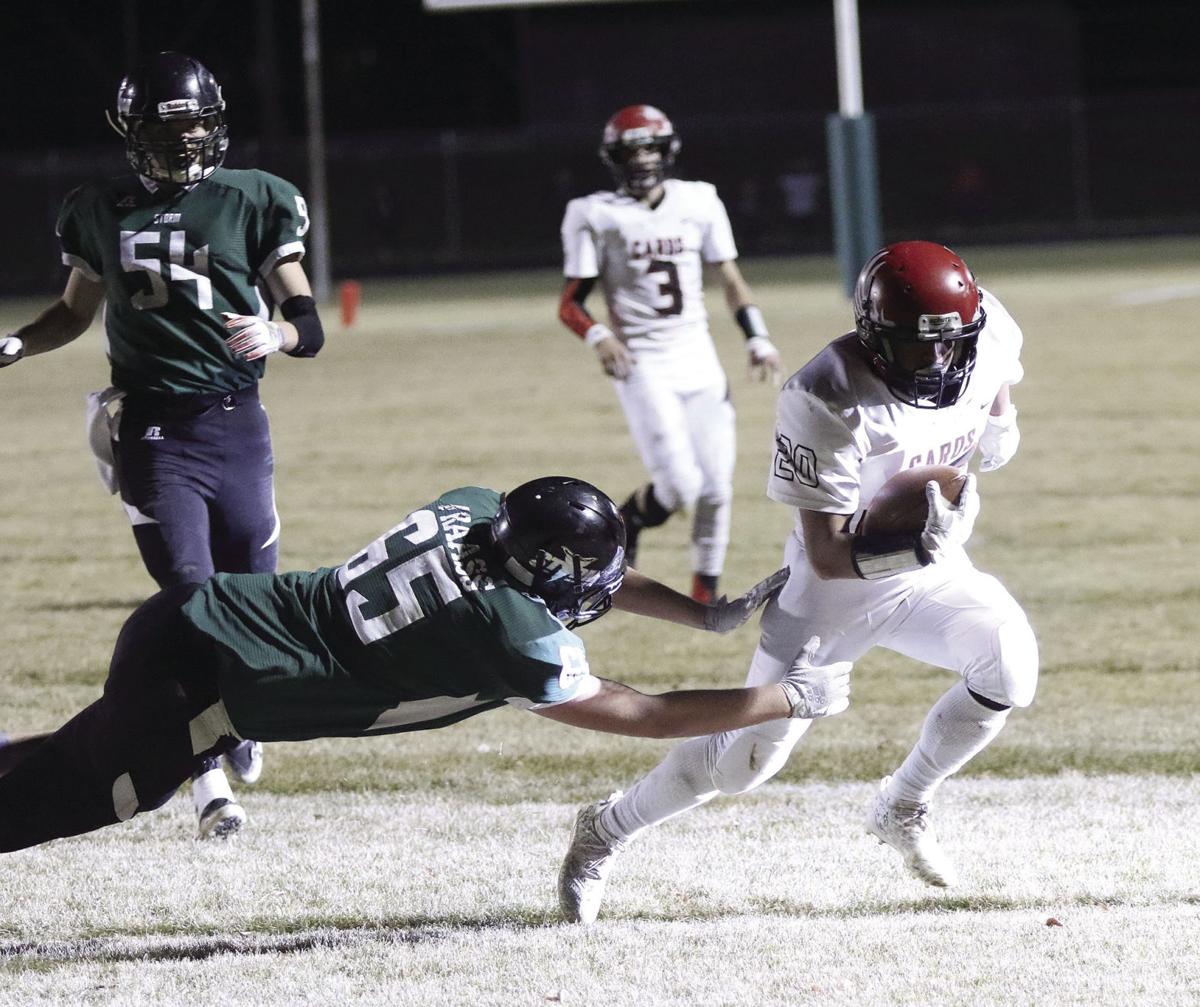 David Reazola (20) of Harvard avoids the tackle of Drew Fraass of Creek Valley during a Class D6 semifinal playoff game on Friday in Chappell. 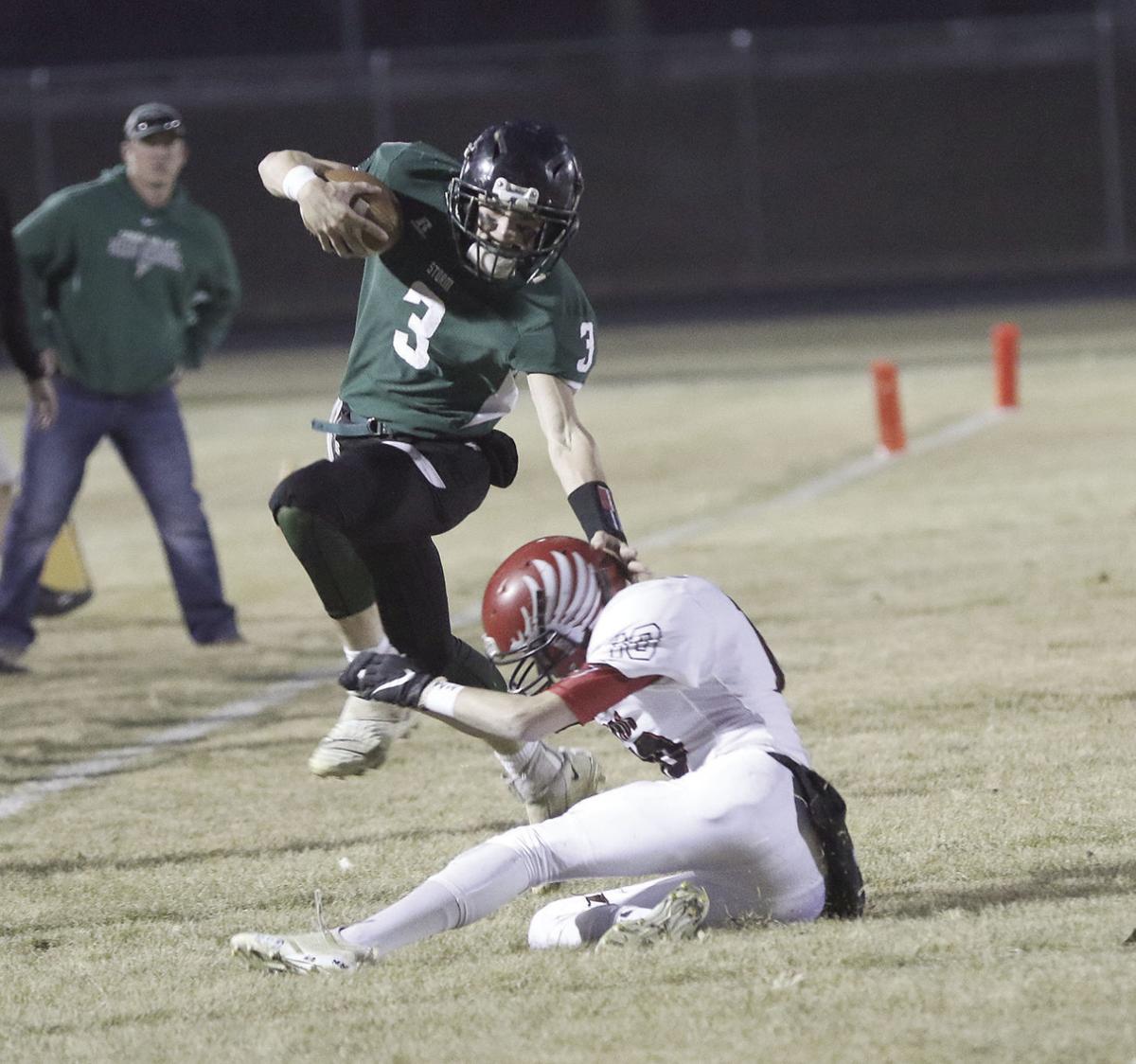 Patrick Hansen (3) of Creek Valley tries to get past Harvard’s Ryan Harms.

David Reazola (20) of Harvard avoids the tackle of Drew Fraass of Creek Valley during a Class D6 semifinal playoff game on Friday in Chappell.

Patrick Hansen (3) of Creek Valley tries to get past Harvard’s Ryan Harms.

CHAPPELL — Teacher and pupil squared off on Friday with a spot in the six-man championship on the line.

Fast forward to Friday night when Trimble brought in his undefeated and No. 2-seeded Harvard Cardinals to Chappell to face Kupper and his unbeaten Creek Valley Storm.

After allowing 72 points in a wild quarterfinal win over Sioux County last week, and a quick touchdown to the Storm on Friday, the Harvard defense buckled down.

The Cardinals (11-0) proceeded to score 50 unanswered points en route to a 50-20 victory and a date with McCool Junction in the D6 Championship in Kearney on Friday.

"With Kupp and I coaching together, a lot of the concepts and ideas are very similar, so we just wanted to trust what we do," Trimble said. "Last week, I think we tried to play a little too perfectly. We just went back to playing our straight-up base stuff, and just playing fast. We didn’t sit back and wait, we forced the issue."

The two main catalysts for the Cardinals were seniors Noah Okraska and David Reazola, with the duo being involved in all seven Cardinal touchdowns. Cardinal junior Ethan Piper also had a big evening, with scores of 10 and 65 yards. The first came from Okraska to tie the game at 6-6 in the first quarter.

Then it was the Harvard defense foreshadowing the rest of the night, forcing a turnover on downs at their own 26-yard line. Reazola scored the first of his four total touchdowns with a 54-yard run for a 14-6 Cardinals lead after one quarter.

Harvard followed the same exact script to begin the second, forcing another turnover on downs, followed by a 60-yard touchdown scamper from Reazola.

With the momentum now firmly on the Cardinals’ side, No. 3 seed Creek Valley (10-1) faced a 4th-and-16. The Harvard defense answered the bell again, getting a sack from Okraska and Phoenix Sadd to give the Cardinals the ball back. On the second play of the ensuing possession, Okraska connected with Reazola 21 yards through the air for a touchdown and a 28-6 lead with 3:33 remaining in the second quarter.

Another turnover on downs and another Okraska touchdown put the Cardinals up 36-6 at the intermission, marking the first time this season the Storm trailed at halftime.

Harvard all but sealed it on the very first play from scrimmage of the second half on a 65-yard touchdown from Okraska to Piper.

Kupper tipped his cap to Okraska and Reazola, along with Trimble during his postgame radio interview.

"Those guys definitely (made an impact). They’re just good," he said. "Coach Trimble called a great game. The opening play (of the second half) played right into the defense we were running, so good on him. I wish those guys the best at state next week. They’re a heck of a team and are really good guys."

Kupper had his own playmaker in Patrick Hansen, who did what he’s done all season for the Storm — a little bit of everything.

"Patrick is such a great kid and is well on his way to becoming a great man," Kupper said. "He’s going to make a fantastic coach somewhere, someday, too. I can’t say enough about the kid."

After falling in the semifinals last season and title game two years ago, Harvard and coach Trimble are determined to finish the job against McCool Junction, which upset top-seeded Cody-Kilgore 40-28 in their semifinal.

"Two years ago we went to Kearney and lost … and last year we felt like we could be champions and we lose in the semis," Trimble said. "It’s probably more of a relief than anything, because we so badly wanted to be (in the championship). Now we just need to dial in on who we are and what we do, and be ready for one wild, crazy game."