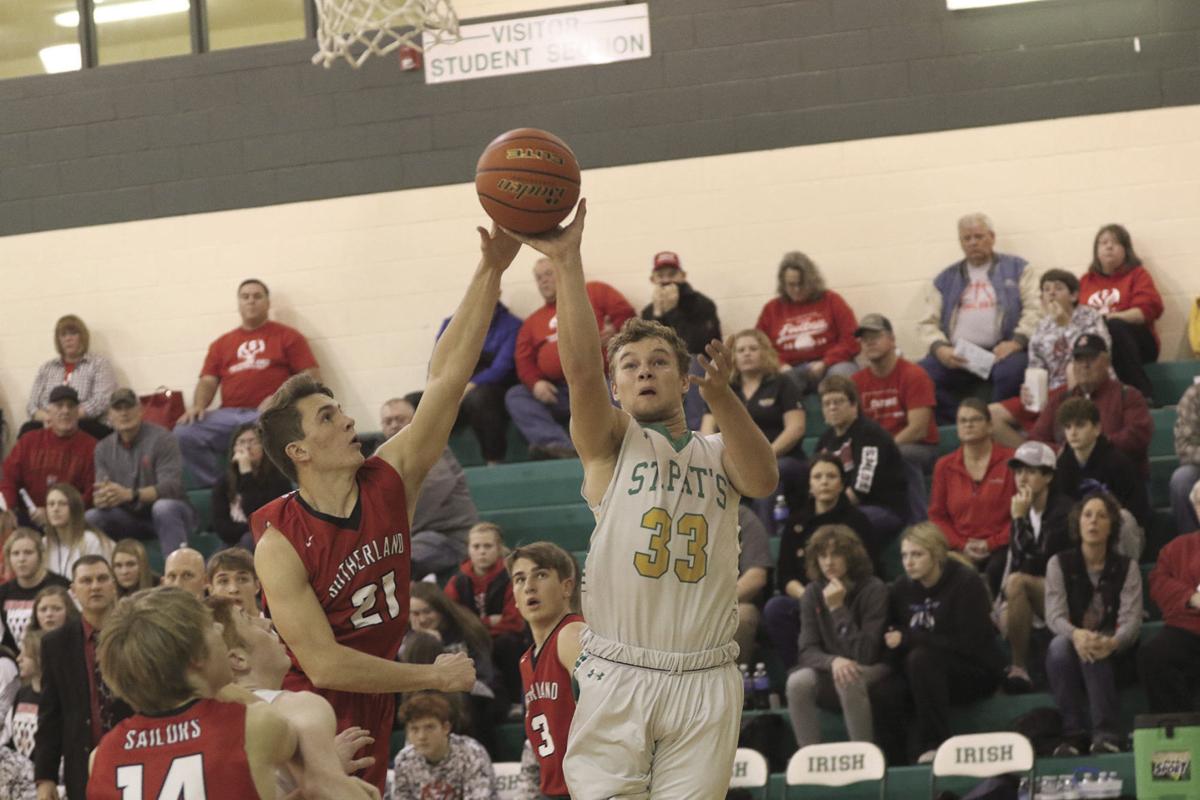 Charles Aufdenkamp (33) of St. Pat’s shoots while being contested by Hunter Hoatson (21) of Sutherland on Saturday at McGahan Activities Center in North Platte. 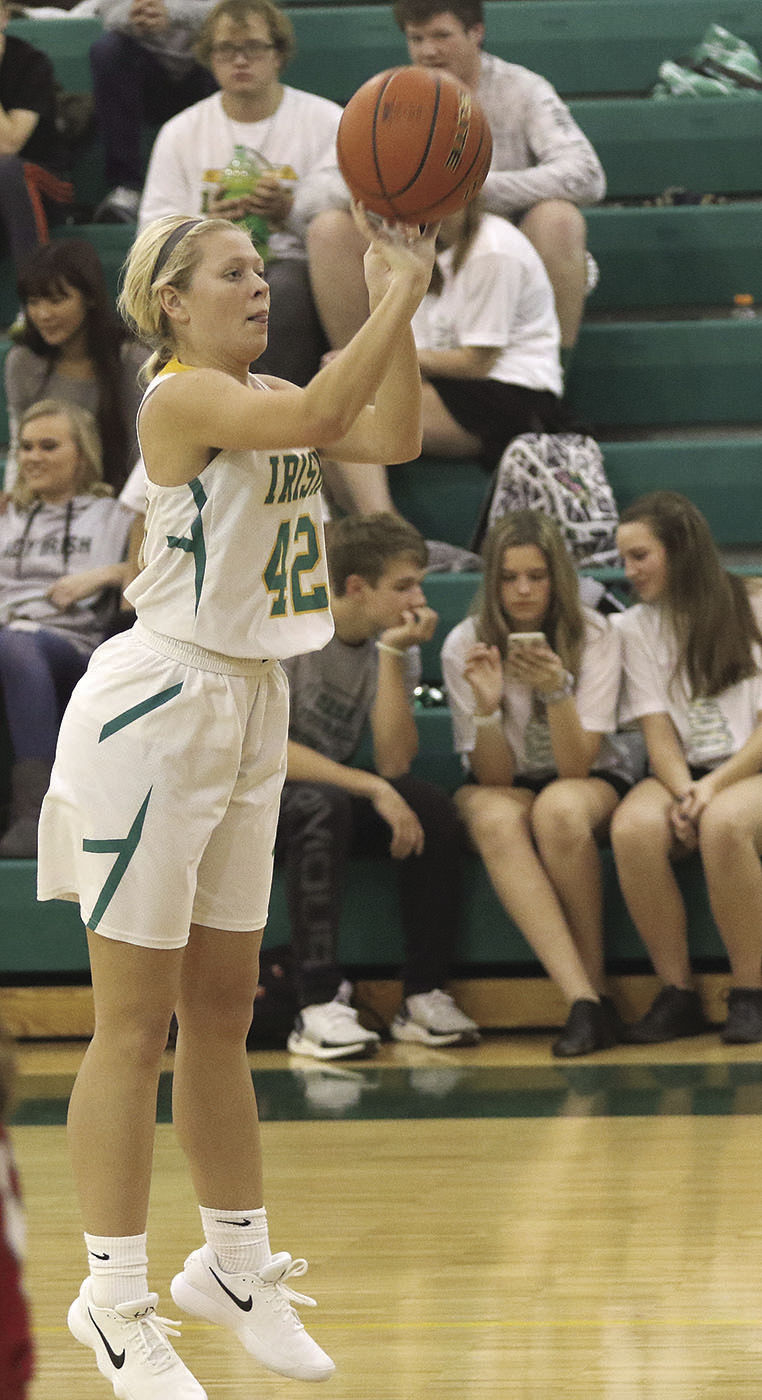 Kinsey Skillstad of St. Pat’s shoots a 3-pointer against Sutherland.

Charles Aufdenkamp (33) of St. Pat’s shoots while being contested by Hunter Hoatson (21) of Sutherland on Saturday at McGahan Activities Center in North Platte.

Kinsey Skillstad of St. Pat’s shoots a 3-pointer against Sutherland.

St. Pat’s was on the positive end of a pair of lopsided victories over Sutherland on Saturday at McGahan Activities Center in North Platte.

The Lady Irish may have had to wait longer than usual to play, but when they got on the court they were certainly ready.

Due to a conflict with a one-act play event on Sutherland’s end, the boys game was played first, followed by the girls — a flip from the tradition order.

The formula for success was a stifling press, transition buckets, free throws, dominating the offensive glass and a sprinkle of a Lady Irish staple — 3-point shooting.

Tonja Heirigs was 7-of-9 from the charity stripe and led the Irish in scoring with a game-high 15 points. Kinsey Skillstad had three of the four Irish 3s and finished with 13 points, while Jayla Fleck and Jenna Kimberling each added seven. Sutherland’s leading scorer was McKenna Bliss with six.

"(Skillstad) was a little timid (on Friday against Broken Bow), but tonight she let it rip," St. Pat’s head coach Nathan Stienike said. "She’s a great inside-outside presence for us and she’s going to be tough to guard if she keeps doing what she’s doing."

"Our press worked really well. We got a lot of turnovers and some easy layups with that," Stienike said. "The big thing was how we crashed the offensive boards. We had multiple shots each possession, and that’s just because the kids were working really hard, and maybe a little frustrated with the loss (on Friday)."

Both teams are back at it on Tuesday when St. Pat’s plays at Creek Valley and Sutherland is at Brady.

offense was the recipe for St. Pat’s to improve to 2-0 on the young season with a 61-35 victory over Sutherland, which fell to 1-1.

The Irish had four players in double figures, led by Jack Heiss with a game-high 14, followed by Charles Aufdenkamp with 12, Logan O’Malley 11 and Dolan Branch 10.

Hunter Hoatson led the Sailors offensively with 10 points, followed by Jade Paxton with eight and Tayton Schuster with seven.

Still early in the season, the offense isn’t quite where Irish head coach Bill O’Malley eventually wants it to be, but he was proud of his team for not letting that affect their defensive effort.

"We were getting the kind of shots we wanted, they just weren’t going in the basket and that can get discouraging," O’Malley said. "To the kids’ credit, they kept persevering and defending. We were able to get some transition baskets and then get ourselves going."

With St. Pat’s clinging to a 24-16 lead at halftime, the turning point came in the third quarter. In that frame, the Irish made three 3-pointers — a pair from Logan O’Malley — outscored Sutherland 22-9 and forced nine Sailor turnovers.

"The third quarter was huge. At halftime, we just encouraged the kids to keep doing what they had done in the first half, and we were confident we’d start to get some shots to fall," O’Malley said.

A big factor in the third quarter success was turning defense into offense.

"We were able to get some deflections and played with great intensity," O’Malley said. "We knew Sutherland would be well prepared and solid in their half-court offense. We weren’t really getting into transition off rebounds, it was coming off deflections for the most part."

Both teams are back at it on Tuesday when St. Pat’s plays at Creek Valley and Sutherland is at Brady.