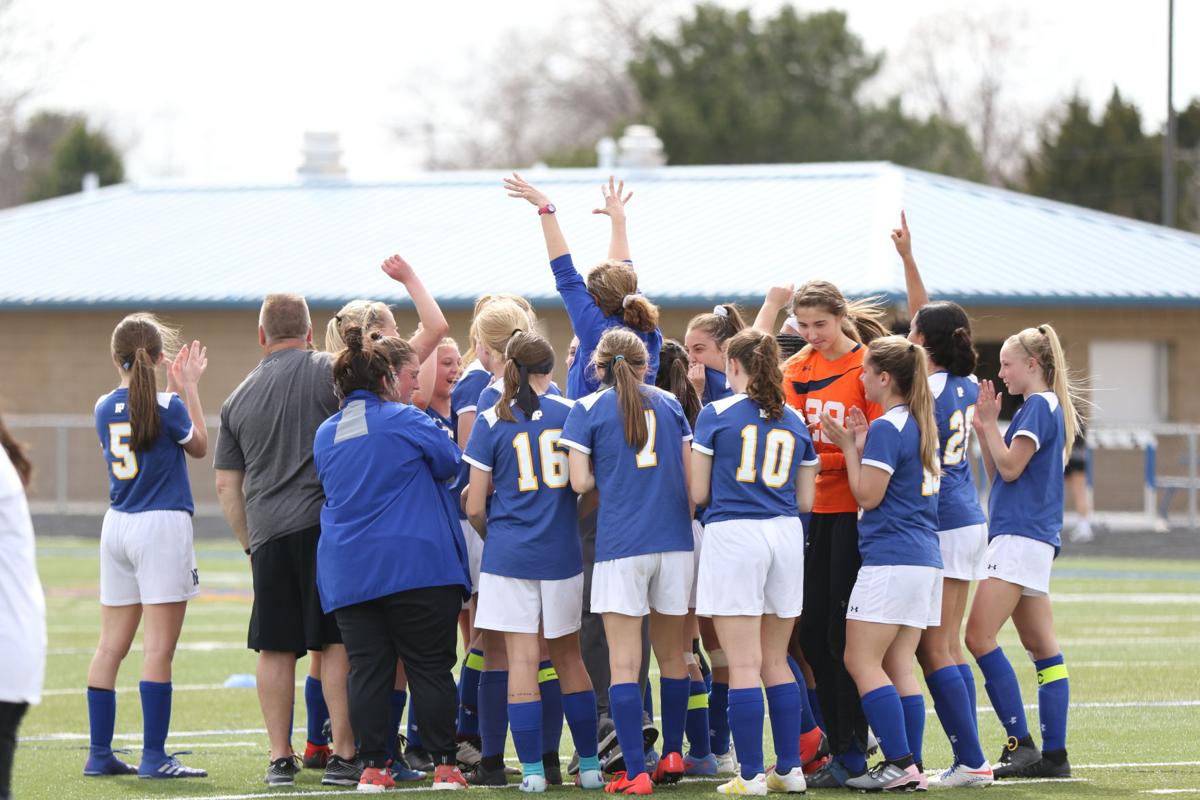 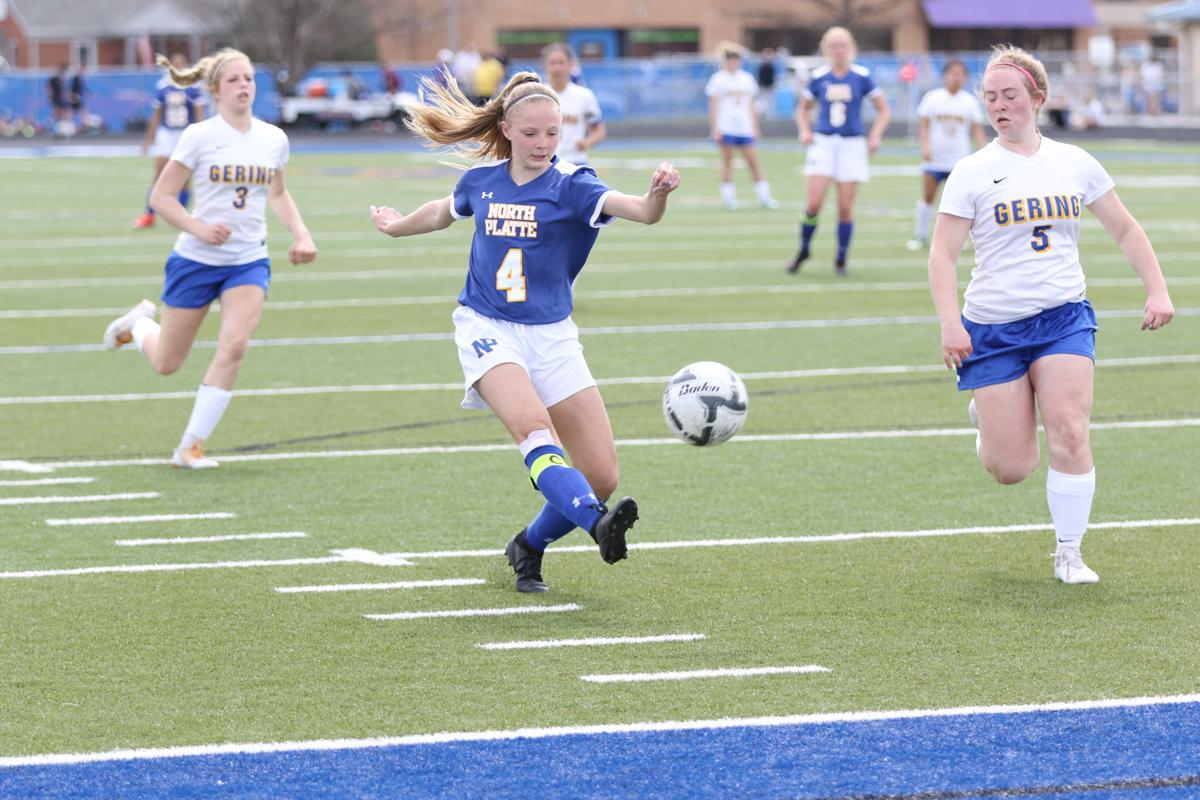 Callie Haneborg (4) of North Platte kicks a would-be goal against Gering on April 6 at Bauer Field in North Platte. Haneborg led the Lady Dawgs with three goals in a 4-0 shutout over Gering in the GNAC championship game.

Callie Haneborg (4) of North Platte kicks a would-be goal against Gering on April 6 at Bauer Field in North Platte. Haneborg led the Lady Dawgs with three goals in a 4-0 shutout over Gering in the GNAC championship game.

In high school sports, where recruiting and targeting players to raise the profile of a team are frowned upon, there’s a genuine delight in organically developing a winning program with homegrown athletes.

When I came to North Platte a year and some change ago, covering a few state competitions in Lincoln and Omaha opened my eyes to the disparity in talent level between the regions.

The calculations weren’t hard to decipher.

In the western part of the state, where a town’s population correlates with a diminished school enrollment, student-athletes are asked to play the role of ironman.

These student-athletes play different sports year-round in order to fill rosters, stunting their growth in one specific sport by focusing on too many at once.

But even in those small towns, a few generational teams sprout from the ashes of rebuilding seasons by a chance encounter that brings together a few trend-setting athletes all within a window of time.

Some that come to mind include St. Pat’s girls basketball, Mullen football and Paxton boys basketball, which have all carried sustained success over the past few years with a core group of athletes — and now, I’d like to add one more.

North Platte fans might not know it yet, but the golden age of Lady Dawgs soccer might be upon us.

I came to this realization based on a few factors. As an avid sports fan with an inclination towards psychology and habit, I religiously lean on a set of guidelines that somewhat stabilize the uncertainty of a game when watching a familiar team.

Some of those rules might include not betting against the Golden State Warriors, New England Patriots or Alabama’s Crimson Tide football in conference play. Those teams, along with the teams I mentioned earlier, share a few common variables. They don’t lose at home, they have a core group of athletes with a high ceiling and they can lean on multiple players to create something out of nothing.

A few weeks ago, standing on the track that wraps around Bauer Field like a dark, rubber necklace, I made a mental note to check off on the first box — don’t bet against the Lady Dawgs at Bauer Field.

The Lady Dawgs actually haven’t lost a game on Bauer Field since May 1, 2017.

Since that 2-1 loss against Lincoln Pius X, North Platte’s girls soccer has celebrated a 12-0 record at Bauer Field that includes a Class A district title over Pius X to clinch its first state tournament berth since 2012. They have also outscored opponents by 4.25 goals per game at Bauer Field since the loss, while giving up just six goals in the 12 games that followed.

It should also be noted that after a 6-10 finish in the 2017 season, the Lady Dawgs currently sit on a 22-5 record — which brings me to the next two variables.

The 2017-18 freshman class brought the likes of phenoms Abby Orr and Gracie Haneborg, a pair of pieces that undoubtedly helped change the trend of Lady Dawgs soccer for good.

Haneborg, who earned Telegraph Player of the Year as a freshman, joined cousin Callie Haneborg, making for one of the state’s most dangerous tandems.

Here’s where the other two boxes get checked.

In the Haneborgs, which sound like a monarch in Game of Thrones, the Lady Dawgs have found a set of young leaders with a high ceiling that can create miracles with their string-like handle on the soccer ball. Blink and you’ll miss Gracie rip the net with a midfield shot that stunned the opponent’s goalie, or a Callie assist that slipped past a row of defenders and found a teammate in position to drill one in.

Both posted stat-padded seasons as underclassmen.

Gracie Haneborg finished her freshman season with 16 goals and 12 assists for a total of 44 points, which placed her in the No. 4 spot on the Class A stats leaders — the only freshman to crack the top 10. Callie also cracked the list, sitting at No. 8 and leading all of Class A in assists with 14.

The tandem combined for 27 goals and assisted on 26, tagging their feet to a remarkable 53 of the team’s 57 total goals last season, and they’re on pace to shatter that mark this season. The duo has already combined for 26 goals, 14 assists and 66 total points in just 11 games.

Then there’s Orr, who aside from owning the softball program’s most runs scored in a season with 48 this year, can play at a high level in multiple sports. Orr stepped in to fill the shoes of goalkeeper Leslie Borges, and hasn’t disappointed. So far in her sophomore campaign, the 6-foot-1 goalkeeper is averaging 3.7 saves per game this season.

This year’s newest Class B member has already won 10-of-11 games and counting — a feat that took them the entire regular season to acquire last year. With a mesh of leadership in seniors Abbie Hedgecock, Mei Hou and Karsyn Buttler, coupled with the sheer talent of its underclassmen, the Lady Dawgs aren’t a team to bet against come the postseason.