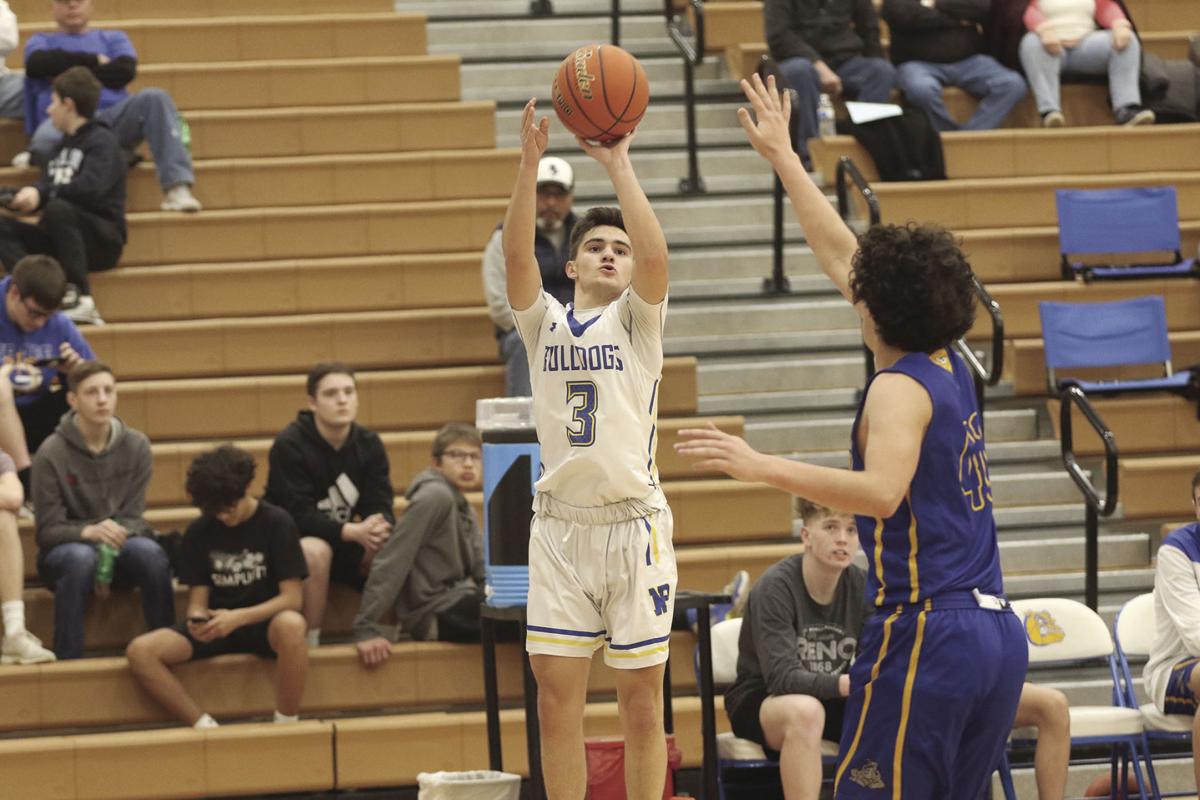 Steven Garcia (3) of North Platte shoots over Sam Rocheleau of Gering on Friday in North Platte. 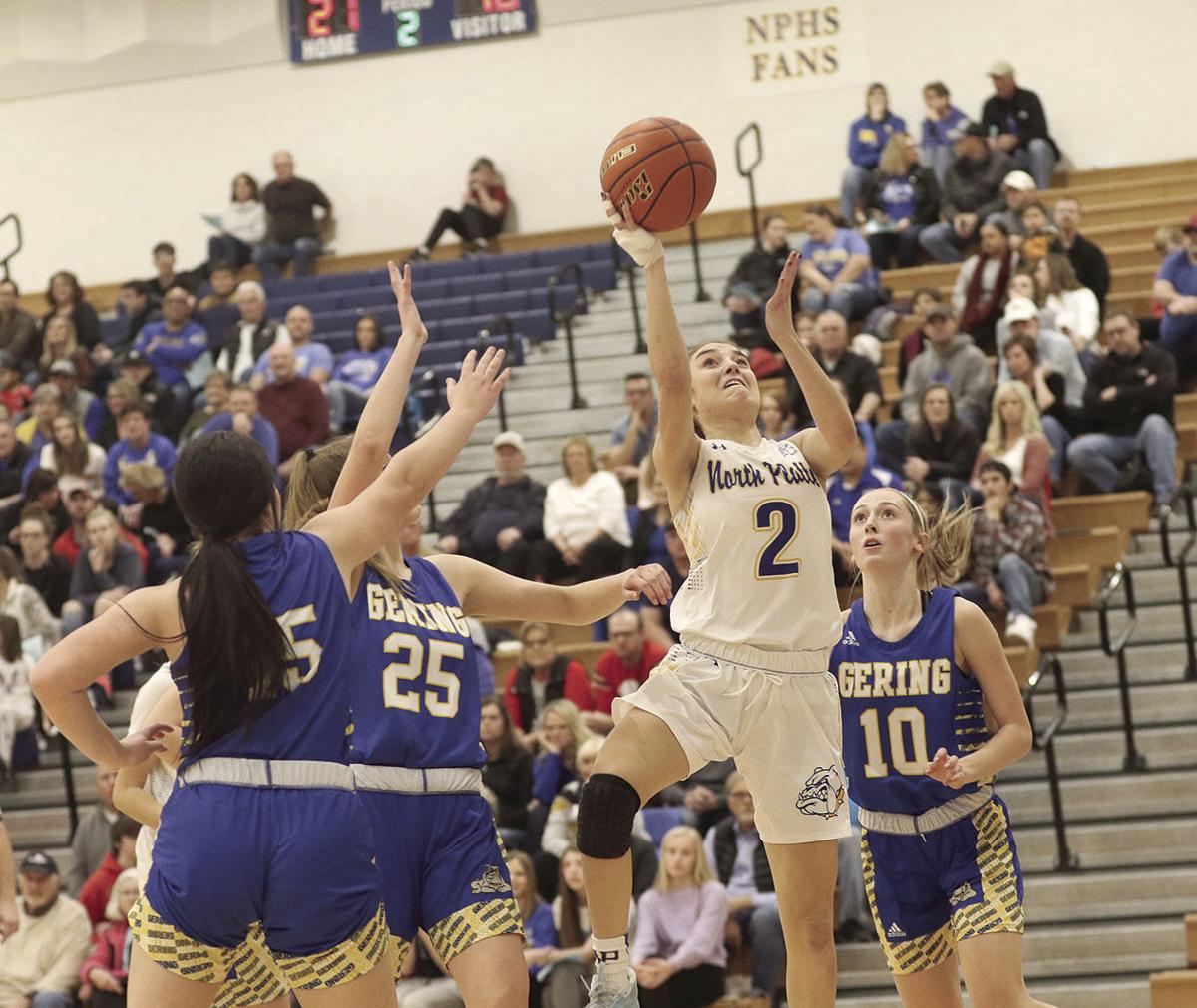 Gracie Haneborg (2) of North Platte scores in traffic against a host of Gering defenders. 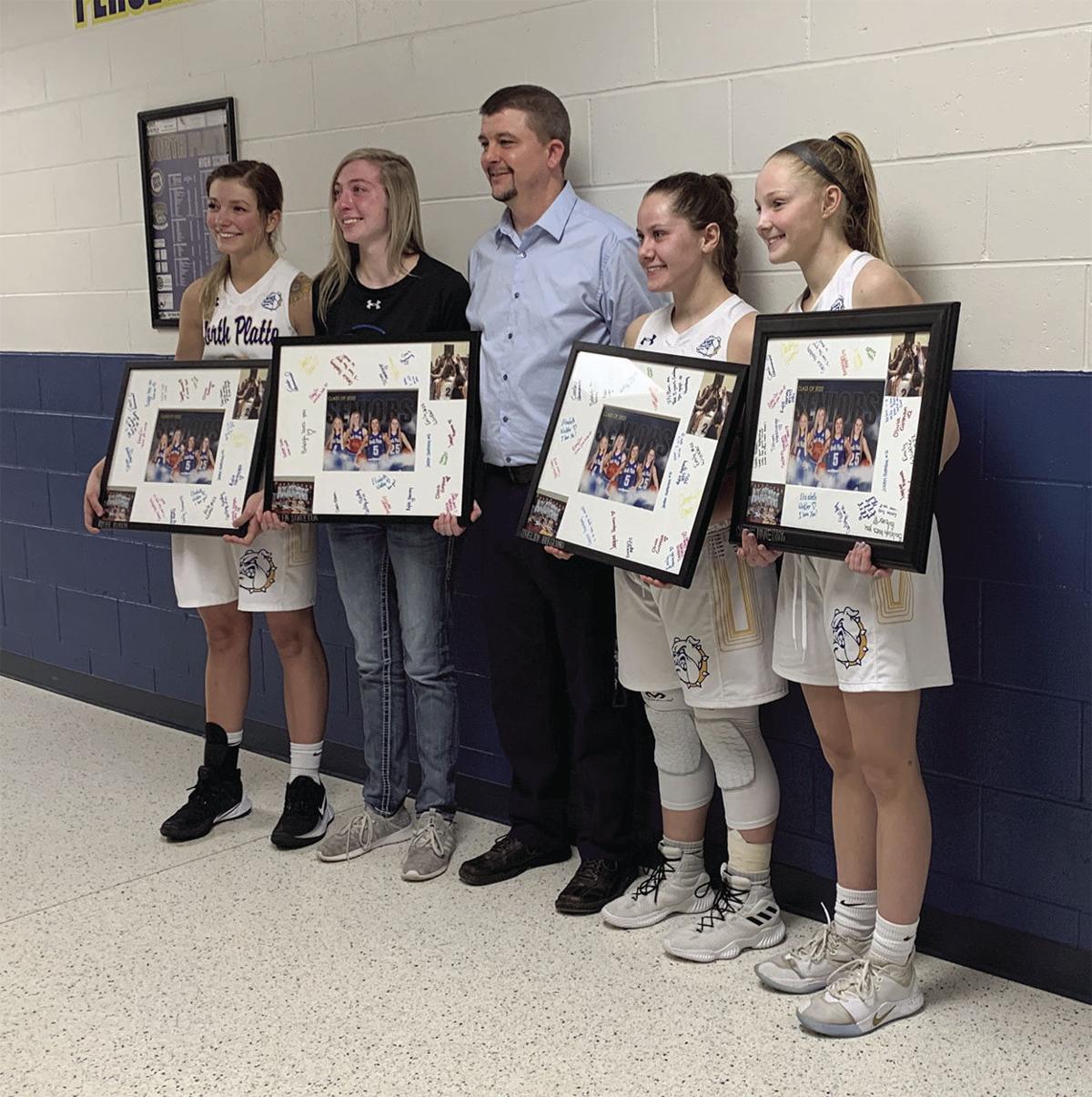 Steven Garcia (3) of North Platte shoots over Sam Rocheleau of Gering on Friday in North Platte.

Gracie Haneborg (2) of North Platte scores in traffic against a host of Gering defenders.

Friday night at the Dawg House was three and a half-hour celebration.

The home faithful paid tribute to the Bulldog veterans on senior night, and watched as North Platte controlled both games in a pair of lopsided victories over Gering.

Those in attendance also saw a little history as Lady Bulldog junior Gracie Haneborg hit an impressive career milestone in a 69-45 win, followed by a 70-47 victory for the Bulldog boys.

For the second time in as many nights, Gracie Haneborg reached the 1,000 career points milestone in her prep career.

OK, that’s not entirely true, but the Bulldog junior, along with North Platte administration thought she had it on Thursday in a win over Scottsbluff. Upon further review, Haneborg was actually two points shy of 1,000.

It didn’t take long for Haneborg to make it official on Friday. Early in the first quarter, the 5-foot-8 junior blew past a pair of defenders and finished at the rim with her left hand for points 999 and 1,000. The Bulldog student section serenaded her with the chant of "that’s 1,000" and she was later honored with a banner before the fourth quarter of the boys game.

"It felt good to get it done tonight," Haneborg said. "Last night, I just felt like I wasn’t there yet, so when I heard I was two points off I wasn’t that surprised. Tonight, it felt normal and it was really exciting."

That bucket helped North Platte (17-4) jump out to a 15-0 lead in a game that was never close. The lopsided score lended its hand toward a celebration of the four Lady Bulldog seniors on senior night.

Kaylen Streeter, Callie Haneborg, Rylee Kurth and Shelby Berglund were honored in a pregame ceremony, and have been a major part of a dramatic turnaround for North Platte girls basketball over the past two seasons.

"That group means an awful lot to us as a program and to me as a coach," second-year North Platte head coach Tyson Hammond said. "Three of the four I taught in middle school math, so I’ve known them for a long time. Getting to see them grow has been fun. It hasn’t been easy for them. There’s been injuries and things all along the way that made their lives kind of difficult. The things they’ve done, I’m forever grateful for."

Callie Haneborg, who scored a game-high 14 points, has played prominently all four years under three different coaches. In her first two seasons, the Bulldogs record was 11-37, while in the last two it’s 29-14. That includes 17-4 this season, with a good chance to host a district tournament in North Platte.

"It’s definitely been a big jump," Callie Haneborg said. "Just growing from being a freshman until now and all the relationships we’ve created along the years has really helped us bond as a team."

Friday’s game wraps up the regular season for North Platte, which now waits for official word from the NSAA when and where they’ll be playing in the postseason.

North Platte is playing their best basketball of the season at an opportune time.

One night after stunning Class B No. 3 Scottsbluff, the Bulldogs (8-13) cruised to a 70-47 win over Gering (8-13). Now, with one regular season game remaining, North Platte has won three straight and five of their last seven.

According to North Platte head coach Matt Kaminski, the change has been between the ears more than anything.

"Honestly, confidence," he said as to what the difference has been. "When you have success and beat a team like we did (on Thursday), you just hope they gain confidence and build on that. There are going to be different opponents with different styles, but the No. 1 thing is the desire to compete and earn things."

"It’s always a special night, because there’s a special inspiration of playing for the last time in the regular season at home," Kaminski said.

Instead of nerves, the North Platte seniors came out on fire with Garcia scoring the first seven, followed by a 3 from Ramos and a 11-0 lead for the home team. By the end of the first quarter, North Platte led 24-8 and was in total control the rest of the way.