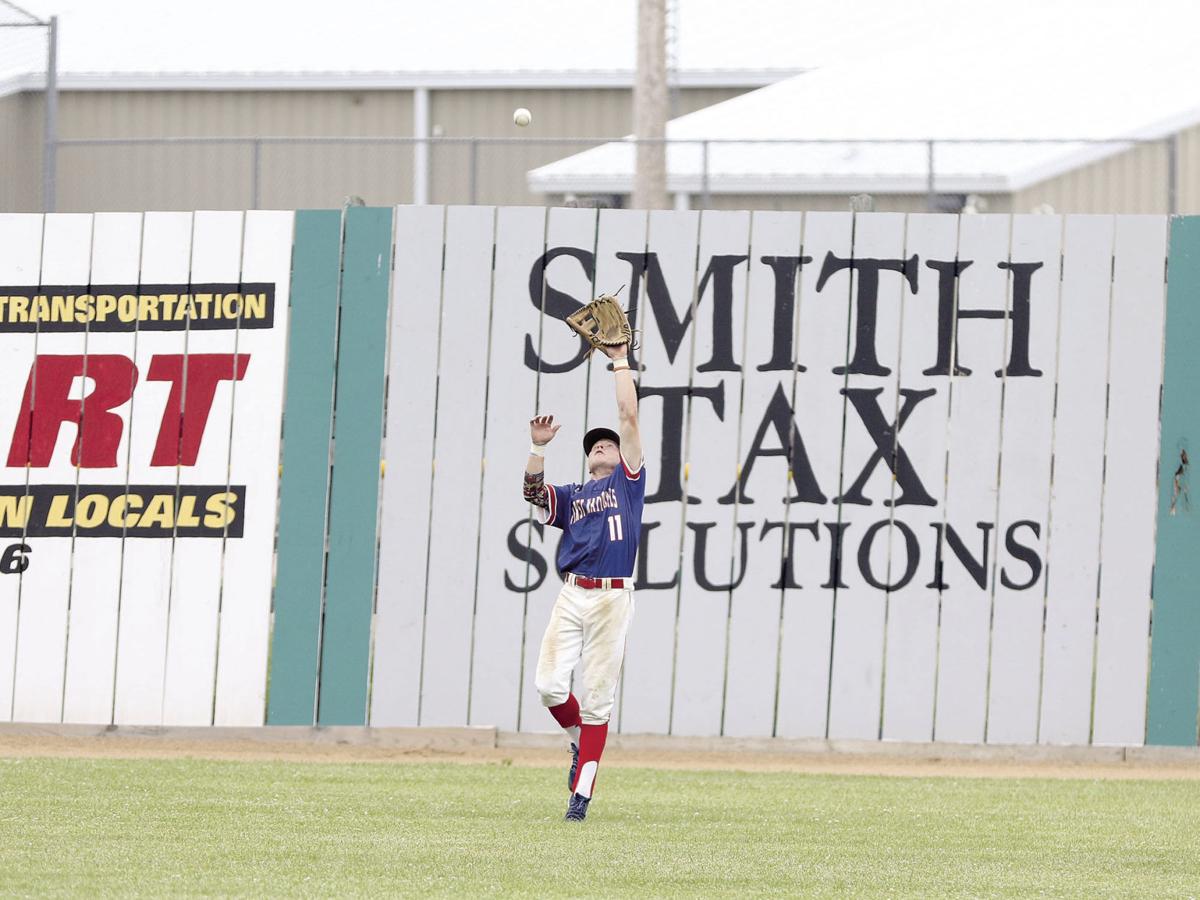 Sam Malsbury of the North Platte First Nationals seniors catches a ball in the outfield against Hastings during the A7 Senior District Tournament on Saturday at Bill Wood Field in North Platte. 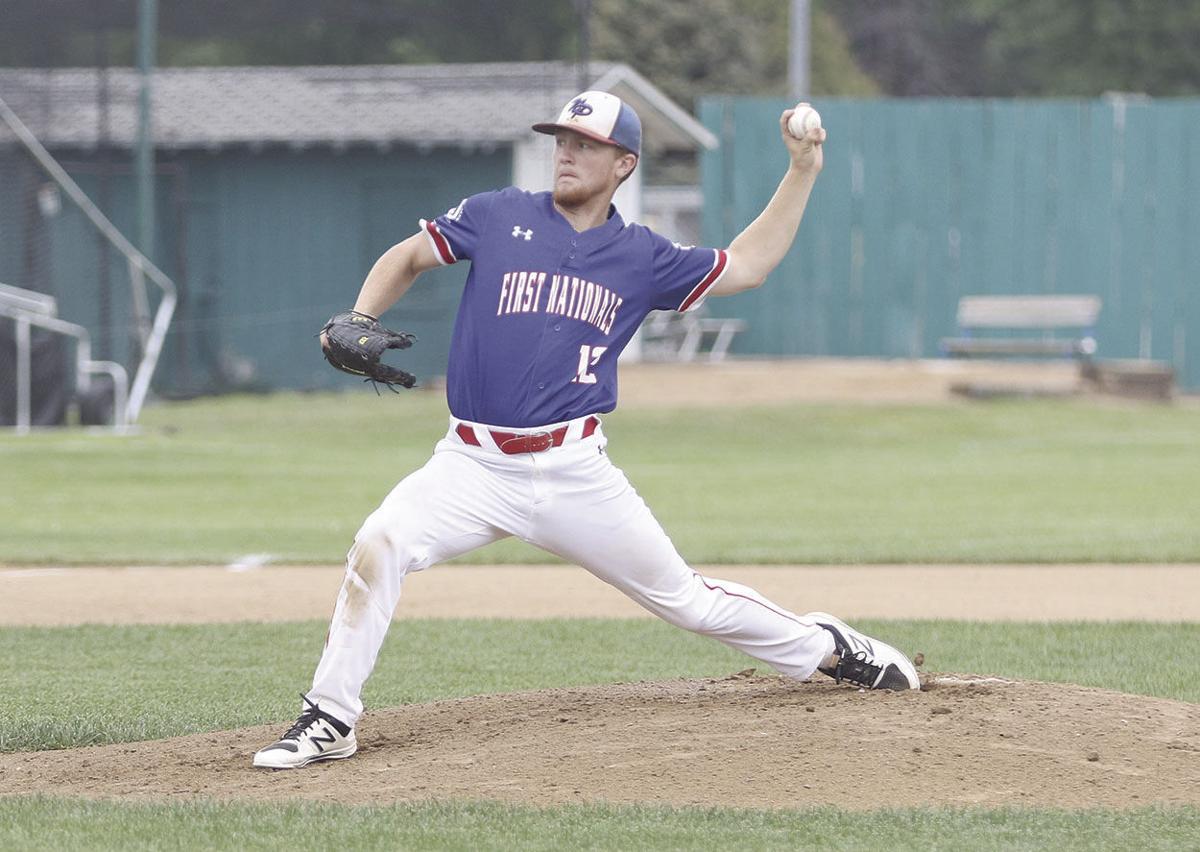 Sam Malsbury of the North Platte First Nationals seniors catches a ball in the outfield against Hastings during the A7 Senior District Tournament on Saturday at Bill Wood Field in North Platte.

The North Platte seniors rode a wave of momentum early, but fell short against top-seeded Hastings on Saturday in the A7 District Tournament.

North Platte (13-22) was shut out in their last meeting with the Five Points Bank Chiefs, but showed a better performance at the plate early in Saturday’s 9-4 loss at Bill Wood Field. The First Nationals fed off the momentum the garnered in a first-round victory over Lexington on Friday.

"We kind of picked up where we left off last night," North Platte head coach Ty Brockmoller said. "We were playing our best ball for this time of year and it was one of those things where we kind of ran out of gas there at the end."

North Platte opened the top of the first with a Gus Kreber RBI single to take the game’s first lead, but Hastings answered right away by ending the inning with a 2-1 lead on four hits.

This time, however, the First Nationals didn’t shy away.

With an RBI triple from Miles Morrell, followed by a single from Dylan Younghans, the First Nationals regained a 3-2 lead in the top of the second. Then, Braden Stiffler’s RBI double with two outs in the top of the third further extended North Platte’s lead to 4-2.

"Our approaches (at the plate) right now are awesome," Brockmoller said. "We just went after it and got in the box and said ‘Let’s go.’"

North Platte’s aggressiveness at the plate forced Hastings’ Tyson Gatto off the mound after he gave up seven hits and four runs in four innings.

"We’re going after that first pitch," Brockmoller added. "And that’s something Hastings had to adjust to by throwing first-pitch changeups later in the game."

The adjustment worked for Hastings, which held North Platte to a meager one hit and no runs after retaking the lead in the top of the third inning.

The Chiefs responded with their own rally to end the bottom of the third, getting three hits and two RBIs to tie the game at 4-4. And after blanking North Platte in the top of the fourth, Hastings added an RBI triple from Tyson Bonham to snag a 5-4 lead.

Hastings added a sacrifice bunt and two hits to drive in one more run in the fifth. And they added two more RBIs in the sixth, which included a double by Mike Boeve that extended it to 9-4.

North Platte now faces an elimination game against Scottsbluff on Sunday at 1 p.m.

Scottsbluff swept the regular season series against the First Nationals, but Brockmoller admitted this North Platte with their backs against the wall is different from the team the WESTCO Zephyrs saw earlier this summer.

"It’s win or go home tomorrow," Brockmoller said. "You want to be playing your best ball at this time of the year, and I think our guys are doing that."

HASTINGS — The North Platte First Nationals juniors were on the wrong end of a 1-0 pitchers’ duel loss to Hastings in the A7 Junior District Tournament on Saturday at Duncan Field.

With the defeat, No. 1 seed North Platte (37-8) falls into the losers bracket, and will play Scottsbluff today in an elimination game at 2 p.m. in Hastings.

Hits were hard to come by on Saturday, as the two teams combined for just six hits all game — four from fifth-seeded Hastings. The game’s lone run came when Trevor Sullivan crossed the plate in the fifth inning on what was scored as a steal of home. Sullivan entered the game as a courtesy runner for Cambren Montague, who led off the inning with a walk.

Beau Dreher pitched a complete game for Hastings, allowing no runs on two hits, walking one and striking out six for the victory.

North Platte committed three errors, while Hastings had none. Tyler Tobey and Jeremiah Seamann were the two First Nationals with hits, both singles.

North Platte’s opponent today, Scottsbluff, defeated Lexington 7-6 in an elimination game on Saturday. North Platte has swept the two game season series against Scottsbluff, winning 14-5 and 15-4 during a doubleheader on June 5 in Scottsbluff.