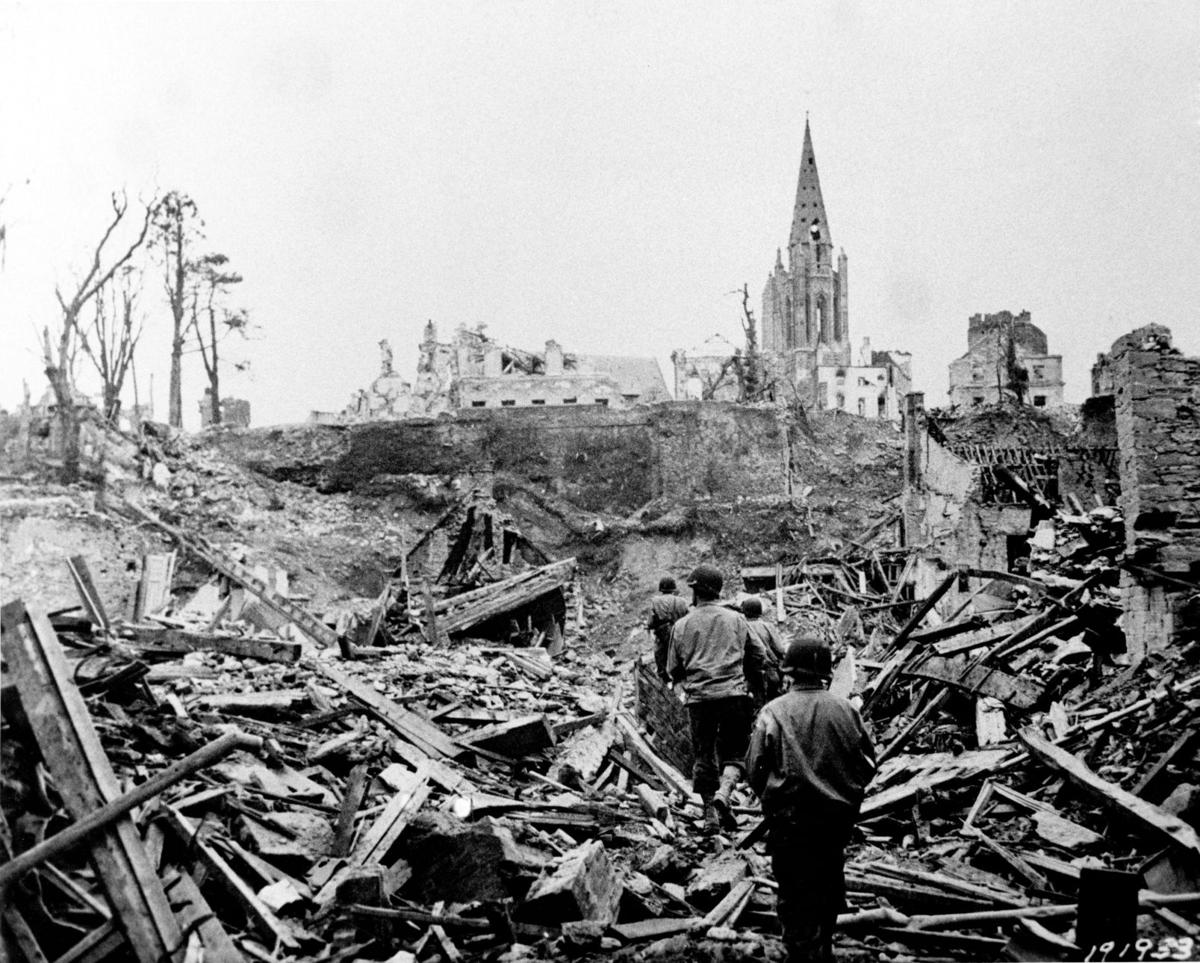 Walking over the destroyed city in July 1944. Nebraska National Guardsmen from the 134th Infanty Regiment enter St. Lo, France. Nebraska soldiers fought a brutal battle up a hill and eventually into St.-Lo- nearly 800 of the regiment's 3,000 men were either killed or wounded during the 48 hours before the Nebraskans entered the french village. 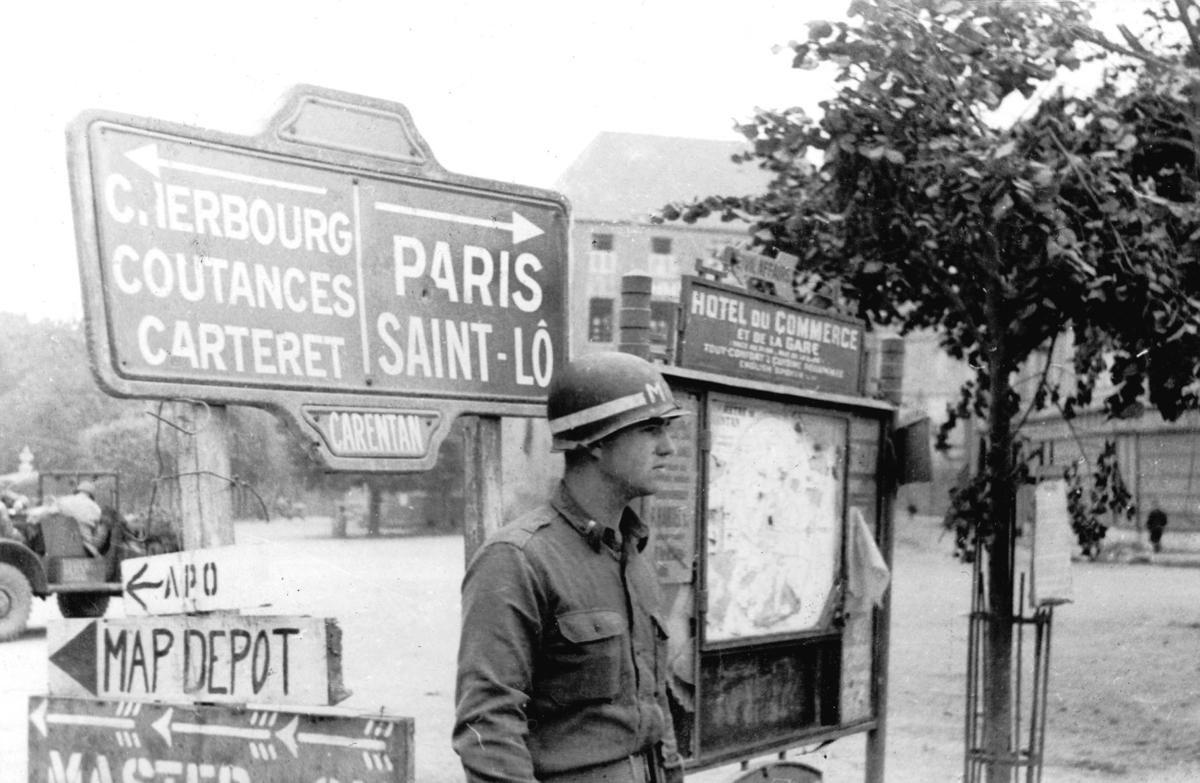 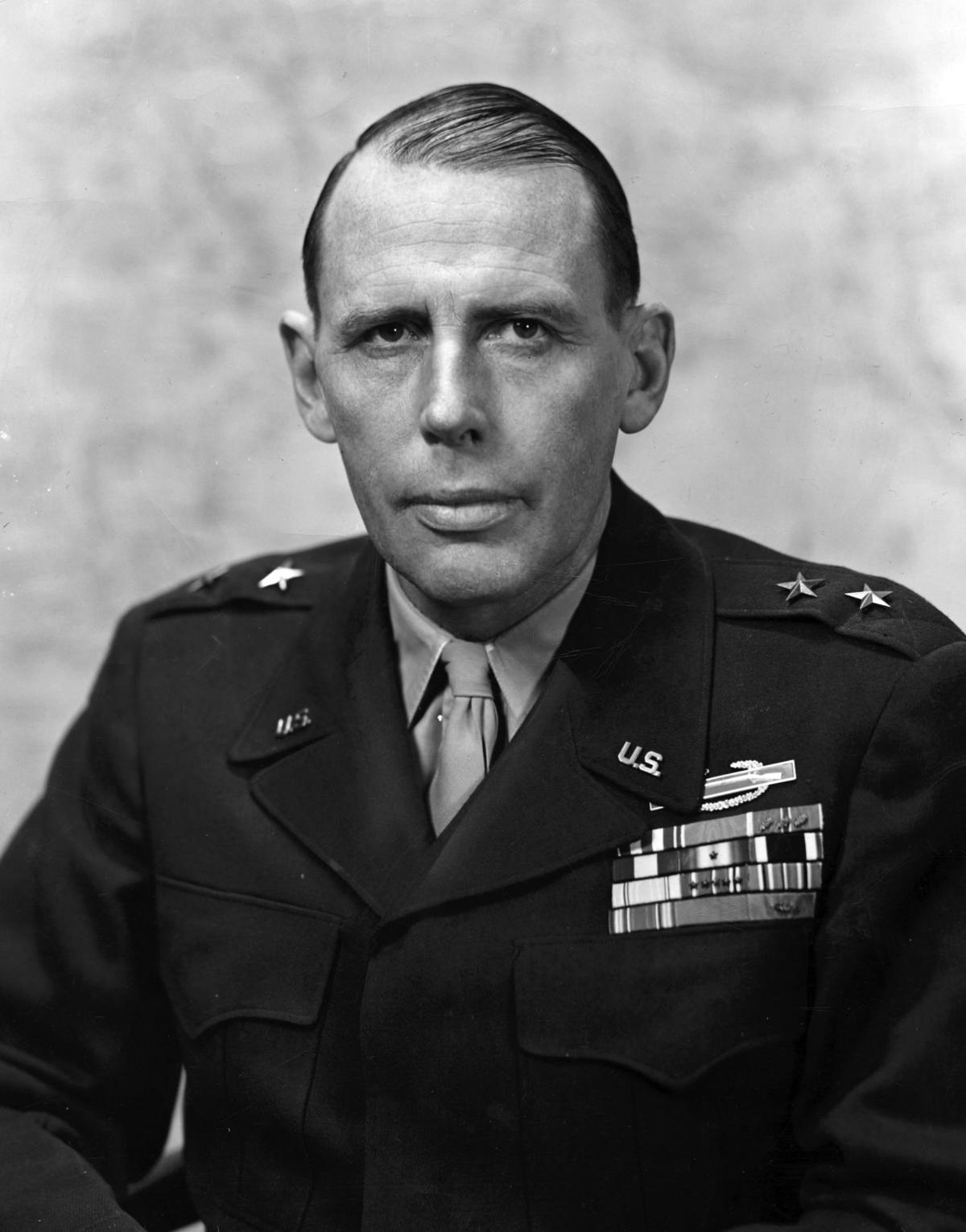 Inch by bloody inch, the Nebraskans from the 134th Infantry Regiment fought through the open fields and dense hedgerows of Normandy.

They staked their claim and made their names on Hill 122, just outside the French village of St.-Lo. The fierce battle, under intense fire from German artillery, made July 15, 1944, the bloodiest day the Nebraska National Guard has ever known, and probably ever will.

The Nebraska regiment fought its way through the rest of the Normandy campaign, the infamous Battle of the Bulge, and on through Victory in Europe Day the following spring. But that first day of combat, just 23 miles from Omaha Beach, was the one that stuck with every veteran who survived it.

“St.-Lo was always their reference point for all their loss and pain,” said Jerry Meyer, the Nebraska National Guard’s historian. “Nothing else was as bad as St.-Lo.”

The Guard is taking time to commemorate the 75th anniversary of the battle of St.-Lo this month, both here and in France.

This week, Meyer is putting the finishing touches on a long-awaited permanent exhibit at the Nebraska National Guard Museum in Seward called “Cornrow to Hedgerow,” dramatizing the St.-Lo fight.

The walk-through diorama simulates the sights and sounds of the battle and is modeled on a painting by Keith Rocco of the same name. The museum spent two years raising $232,000 to build the display. It will be unveiled publicly for the first time Thursday, during Seward’s huge annual Fourth of July celebration.

“It’s our cornerstone exhibit,” Meyer said. “Seventy-five years later, we can really honor the 52 Nebraskans who were killed in that battle.”

The exhibit has been assembled by Omahan Doug Hartman, of Hartman Historical Services. The former Nebraska National Guard officer has done extensive research and writing on the St.-Lo battle.

The 134th Infantry Regiment was part of the 35th Infantry Division, which had been federalized in December 1940 and filled out with draftees from around the country. After the Pearl Harbor attack, the division was assigned to Southern California for defense of the southwestern United States. The landing at Omaha Beach a month after D-Day — which was June 6, 1944 — represented the unit’s first combat action.

The planners of D-Day had expected the units landing at Omaha Beach to push forward and take St.-Lo by the evening of the first day.

That forecast proved to be wildly optimistic. The troops struggled to establish a beachhead. Once they did, German reinforcements moved to surround the Normandy beaches and pen in the Allied invaders.

Instead of one day, it took more than a month to reach the outskirts of St.-Lo. The 134th Regiment was sent as a relief unit to take over for units that had been battling constantly since the beginning of the invasion.

Meyer is escorting a group of about 45 civilians — including Guard veterans, descendants of men who served in the 134th, Gold Star family members and history buffs — on a 10-day tour that will start on Omaha and Utah Beaches and follow the route of the 134th through Normandy, St.-Lo, Nancy and the Ardennes forest, where the regiment fought the Battle of the Bulge.

They’ll wind up in Rheinberg, Germany, where the Nebraskans crossed the Rhine River near the end of the war.

The group will take part in multiple ceremonies of commemoration along the way. They will visit U.S. military cemeteries at Normandy, Lorraine and Luxembourg.

“At each one, we’ll lay a wreath,” Meyer said. “There will be lots of keys to cities, proclamations.”

Maj. Gen. Daryl Bohac, the state’s adjutant general, is leading another group — as many as 40 Nebraska National Guard soldiers — on visits to Normandy and St.-Lo for 75th anniversary ceremonies. Their tour is being framed as a “staff ride,” an Army term for an educational tour of important military sites.

The military and civilian group will see Hill 122, so named because it stood 122 meters (400 feet) high. The Germans commanded the heights and opened fire on U.S. forces trying to take the town, which was at a strategic crossroads.

The Nebraska regiment fought fiercely to seize the hill. Nearly 800 of the 3,000 soldiers from the 134th who fought there were killed or wounded.

The regiment used more ammunition in one day than any two divisions had used in any previous day, reported Omaha World-Herald war correspondent Lawrence Youngman, who accompanied the 134th during the Normandy campaign. The unit’s rallying cry was, and still is, “All Hell Can’t Stop Us.”

The Army, though, shifted credit for the capture of St.-Lo to another unit. The 134th, under the command of Col. Butler Miltonberger, of North Platte, was ordered to pull back from the ruined town while members of the 29th Infantry Division, made up mostly of soldiers from Virginia and Maryland, marched into the city July 18. The 29th had landed more than a month earlier, on D-Day.

One of Youngman’s 1944 dispatches was headlined “134th Enters City First; Others Get Credit.”

Miltonberger, who went on to head the Nebraska National Guard after the war, seethed over the slight. Many of his soldiers did, too. He wrote letters to newspapers and magazines trying to correct the record, until his death in 1977.

The opening of a St.-Lo museum in the 1990s that honored both groups of soldiers eased the burn a little. So did the dedication of the monument at St.-Lo 10 years ago in honor of Lt. Col. Alfred Thomsen of Omaha, commander of the regiment’s 3rd Battalion, who died of wounds suffered in combat two weeks after the St.-Lo battle.

“We have always kind of felt overlooked,” James Huston, an officer with the 134th during the war and a close friend of Thomsen’s, told The World-Herald in 2009. “We’re overlooked no more.”

Huston died in 2017, at age 98. He was one of the unit’s last survivors. Meyer said he doesn’t believe any are still living now.

At St.-Lo, the hinge between the horrors of D-Day and the liberation of France, North Platte…